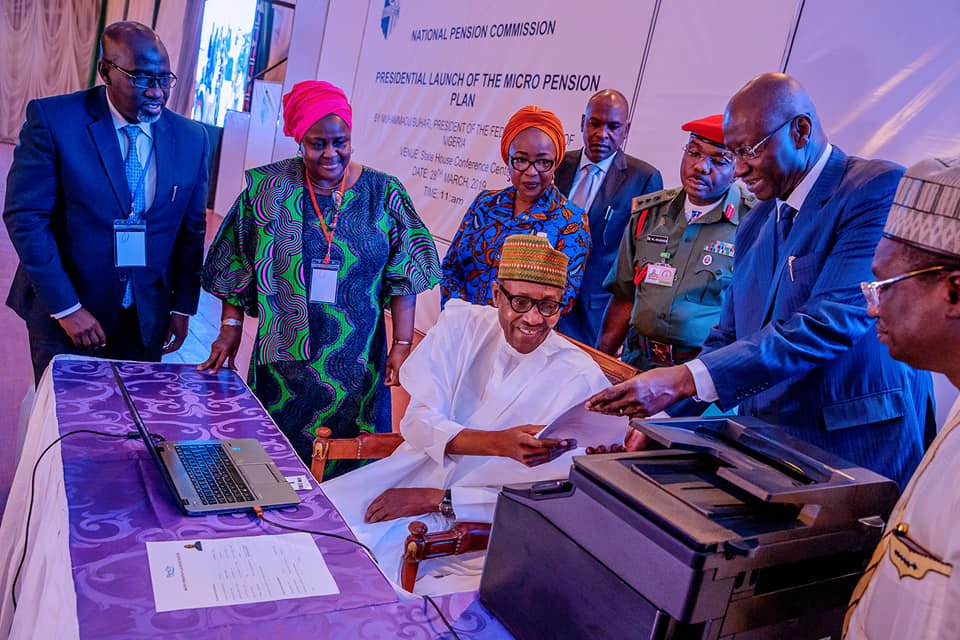 The President During The Micro Pension Scheme Launch

President Muhammadu Buhari Thursday in Abuja said the dignity of public servants, who worked tirelessly and sacrificed for the greatness of Nigeria, will be restored, assuring that the Federal Government will rev up the process of sanitizing the pensions system.

Speaking at the launch of Micro Pension Plan, organized by National Pension Commission at the State House Conference Centre, President Buhari said retired public servants deserved better treatment and effective service that meets their needs to carry on after retirement, promising to remove the “rot within the pension system’’.

“The dignity of retired public servants who sacrificed their lives for this country will be restored. We will ensure all hard working Nigerians in the private sector, both formal and informal, can retire without fear,’’ Buhari said according to the statement made available to Naija News by Mr. Femi Adesina, special adviser media and publicity to the President.

The President noted that the Federal Government will continue to support the National Pension Commission to ensure a successful roll-out of the Micro Pension Plan, which will capture citizens that are not fully captured in the formal corporate sector.

“In addition to this program, we are also working tirelessly to sanitize some of the rot within the pension system we inherited. I want to assure all Nigerians that this government remains committed to resolving all pending issues on pension payment in the federal public sector despite the lean resources of Government,’’ President Buhari added.

He said trade associations, unions, non-governmental organizations and other stakeholders in the informal sector should join hands with the government and pensions industry to enlighten their members and the general public on the benefits of Micro Pension Plan.

“Today, millions of traders, farmers and other entrepreneurs in various cottage industries are completely excluded from the different pension programs in existence.

“The Micro Pension Plan is the natural next step. The program guarantees that when these hard working citizens retire, they can still live in dignity and comfort,’’ he said.

As part of efforts to diversify the economy and create a more inclusive and enabling environment for all Nigerians, President Buhari said the government has provided grants, concessionary loans and technical support through Small and Medium Enterprises clinics to farmers, traders and SMEs.

At the event, the Secretary to the Government of the Federation, Boss Mustapha, said the new scheme will provide more security for Nigerians in the informal sector, and expand the country’s pension coverage as well as boost the economy.

“This scheme also benefits the government because it has the potential to generate a pool for investible long term funds that can drive economic development,’’ he said.

In her remarks, the Acting Director-General of National Pensions Commission, Hajiya Aisha Dahir–Umar, said the Contributory Pension Scheme had recorded huge success since it was launched in 2004, with the formation of long term domestic capital, represented by N8.7 trillion worth of pension assets as at January 2019.

“The Micro Pension Plan is remarkable because it unveils a unique financial product, which democratizes the saving culture in Nigeria in a systematic and efficient manner,’’ she said.

Dahir–Umar said the plan was designed after wide consultations with stakeholders, noting that the product is flexible with contribution amount and channel of remittance of contributions to respective pension accounts.