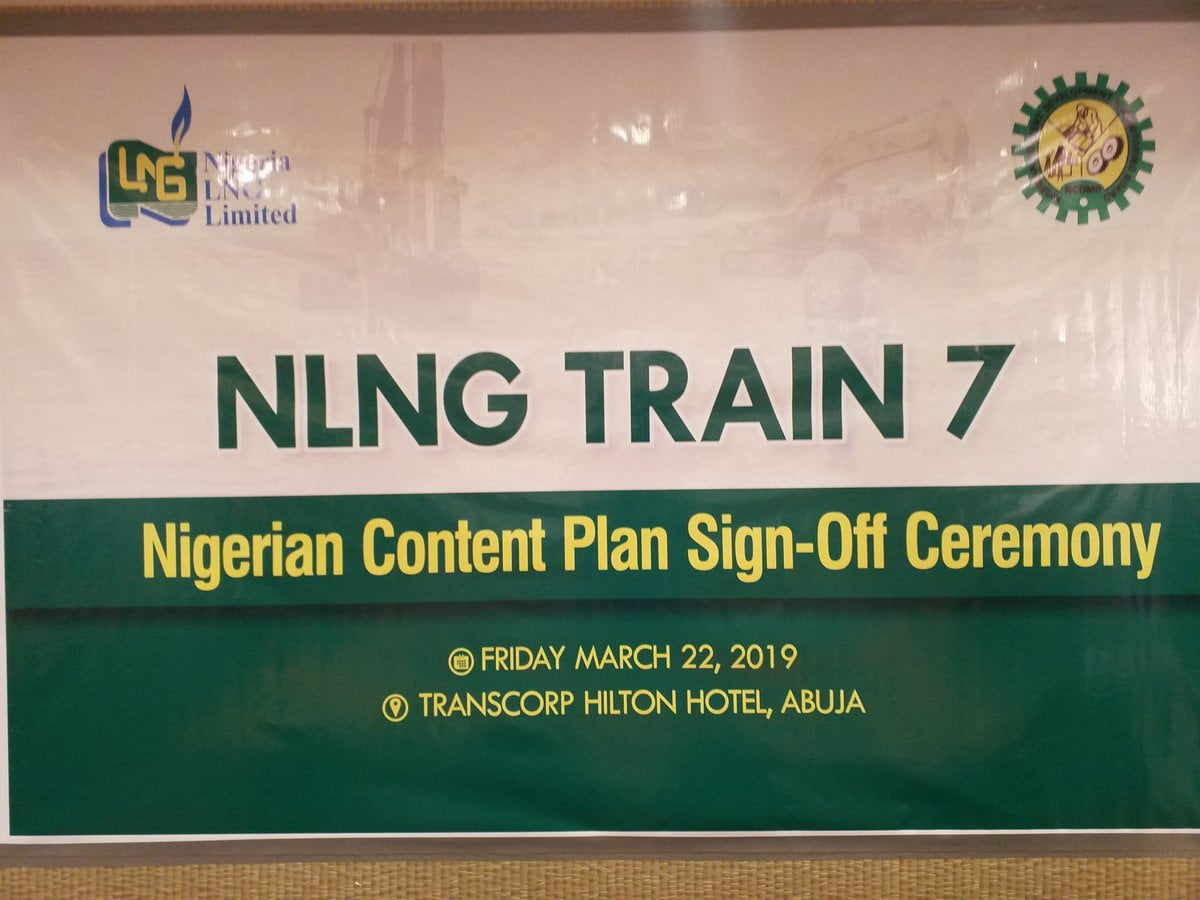 The NLNG Train 7 project is being taken up to increase NLNG’s production capacity by 35% from 22 million tons per annum (MTPA) to 30 MTPA of liquefied natural gas (LNG). NLNG is a partnership between the Nigerian government, represented by Nigerian National Petroleum (49%), with private oil and gas companies Shell (25.6%), Total Gaz Electricite (15%) and Eni (10.4%).

Currently, the NLNG plant located on Bonny Island in Rivers State comprises six trains in operation, which, in addition to 22 MTPA of LNG, also produce 5 MTPA of natural gas liquids (NGLs) in the form of LPG and condensate. The feedstock for the production is 3.5 billion (standard) cubic feet per day (Bcf/d) of natural gas.

The NLNG Train 7 project is expected to involve more than over 10,000 people during its peak construction stage.

@TonyAttah “2 milestones to #NLNGTrain7 have been achieved. This is a third and we are now at a stage where we start to crystallize the plans and get to FID” @SMai_Bornu

According to the Nigerian government, the signing of the NCP marks a major step towards launching gas project that is expected to create a flurry of activities in the country’s oil and gas sector while immensely contributing to its economy.

The full value network of the NLNG Train 7 project is nearly $12bn, which includes the net cost of the project, estimated at $4-$5bn and an identical expenditure to be incurred on the company’s operational base in Bonny.

NLNG managing director Tony Attah said: “NCDMB and NLNG are fully aligned to collaborate during the operationalization of the plan. This synergy will ensure that value added opportunities for Nigeria are indeed maximized and the Train 7 project is delivered to meet international standards of quality and safety.”

The NCDMB and NLNG signed the Nigerian Content Plan, NCP for the NLNG Train 7 project, taking a big step towards kick- starting the huge gas project that would create a flurry of activities in the oil and gas sector and contribute immensely to the nation’s economy.

Shareholders of NLNG are expected to make a final investment decision (FID) for the LNG project by the end of the fourth quarter of this year.

Upstream operations in drilling and producstion are on the brink of disruptive change, with bigger, better data, improved decision making and innovative developments increasing exponentially.

NCDMB executive secretary Simbi Kesiye Wabote said that the NLNG Train 7 project related work will see 100% fabrication of the condensate stabilization unit, pipe-racks, flare system, and non-cryogenic vessels, which will all be carried out in Nigeria itself. At the same time, site civil works on roads, piling, jetties and others will involve local businesses.

“It will also provide great opportunities for utilization of local goods and services in addition to enhancing and developing new capacities and capabilities for the local supply chain. There will be 100 percent local procurement of all LV cables and HV cables, all non-cryogenic valves, protective coatings, and all sacrifice anodes. 70 percent of all non-cryogenic pumps and control valves will be assembled in-country.”