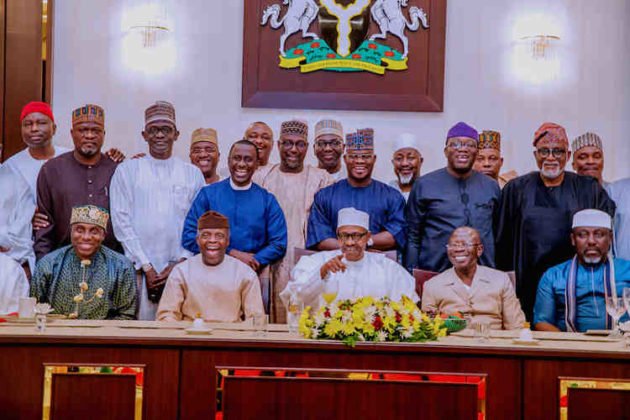 President Muhammadu Buhari has in the late hours of Monday, hosted State Governors and Senators-elect of the All Progressives Congress (APC) to a dinner at the new Banquet Hall of the Presidential Villa in Abuja, Nigeria’s capital.

Those in attendance include the National Chairman of the APC, Adams Oshiohmole; Secretary to the Government of the Federation, Boss Mustapha and other presidential aides.

Naija News reports that the governors of Kogi, Jigawa, Oyo, Kaduna, Kebbi, Zamfara, Borno, Yobe, Plateau, Osun and Lagos were also in attendance while the Senators-elect who attended the event includes all those who had indicated interest to contest for the seat of President of the Senate in the 9th National Assembly.

Among other senators, Ahmed Lawan, Danjuma Goje and Ali Ndume all from Northeast zone of the country and Abdullahi Adamu from the North Central zone were also not absent at the event.