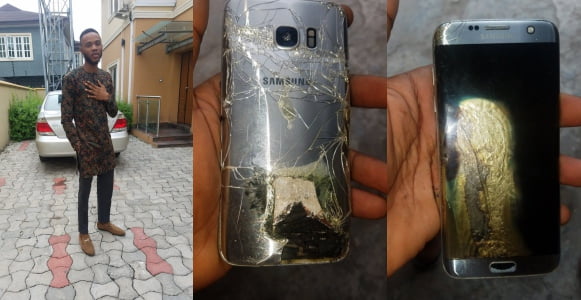 A middle-aged man has narrowly escaped his own death after his Samsung mobile phone exploded.

Naija News reports that the phone belonging to the Samsung customer exploded inside the pocket of the customer.

While confirming the incident, a Twitter user identified as @of_pablosoares who narrated the incident via his twitter handle narrated how his Samsung Galaxy S7 edge smartphone exploded without being plugged to an electrical outlet.

In his words, the Twitter user wrote; “Hello. Here is my S7edge dous sim that exploded last night without being plug to electricity. Now let’s imagine I had this phone in my pocket or on my chest before the incident, it would have practically damaged my body

I had to deep this phone inside a bucket of water to stop the explosion. We have to be very careful with this gadget especially when we have kids around.”