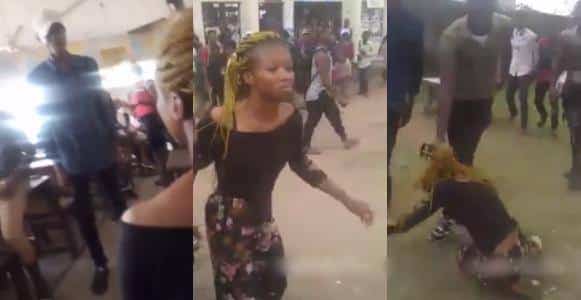 A lady identified only as Jane has been physically assaulted by her boyfriend after she allegedly dumped him moments after he paid her N20,000 school fees.

In a video which has gone viral on social media, the apparently furious former boyfriend could be seen assaulting his former lover and at the same time demanding a refund of his N20,000.

The development, this online news platform reports, caused a scene at the school campus, with some students pleading with the man to stop assaulting the lady.

In the video sighted by this reporter, the former boyfriend could be heard telling the lady in the lecture room: “Jane bring out my money, Jane I’m talking to you, bring out my money” before he started assaulting her.

Obviously unable to withstand the assault, Jane ran out of the lecture room, her former boyfriend ran after her, shouting in the process: “Jane bring my money, Jane where is my money, Jane I want my money”.

“Why you dey push me? You dey mad?” Jane’s former boyfriend could be heard telling the male student who tried to stop him from running after Jane.

In the latter part of the video, Jane pleaded with her former boyfriend that she would refund his money but her words were not comforting enough as the former boyfriend continued to assault her.

Meanwhile, as at the time of filing this report, the management of the Michael Okpara University of Agriculture (MOUAU) was yet to issue a statement regarding the incident which has since garnered mixed reactions from Nigerians.

Jigawa Fire: Victims Cry Out For Help, Saying ‘We Now Sleep’ On The Streets’