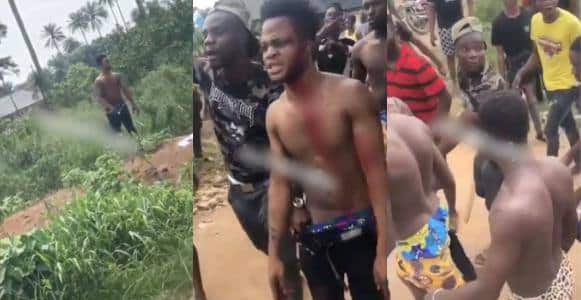 A heartbroken, middle-aged lover has been prevented from taking his own life in a community in Delta state.

Naija News reports that the lover had decided to take his own life after he had visited the Delta State Polytechnic, Otefe, to try to win back his lover, but was turned down by his girlfriend.

After he was turned down by his girlfriend who seems not to be interested in their relationship anymore, the lover boy approached a nearby bush, grabbed two broken bottles both on his right and left hand and repeatedly stabbed himself.

While he was in the pool of his own blood, the Loverboy would have passed out but for the timely intervention of the passersby in the area that swiftly came to his aid.

The passersby overpowered the lover boy and rescued him from taking his life over the insincerity of his lover.

This is coming after Naija News had earlier reported on how another Lover boy invaded the house of his girlfriend to retrieve all the gifts and household materials that he had earlier purchased for his girlfriend.