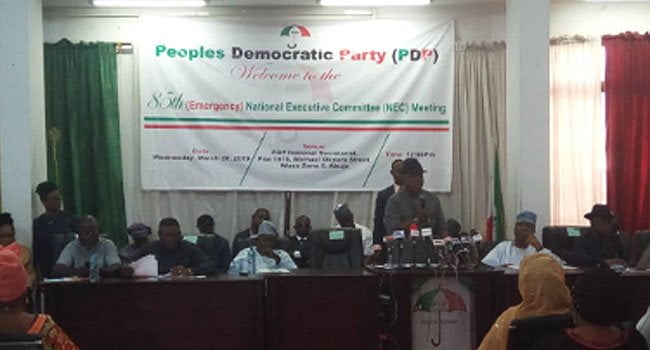 At the meeting, the opposition party alleged that the Independent National Electoral Commission (INEC), Nigeria’s electoral umpire, was the culprit of the 2019 general elections.

PDP accused Prof. Mahmood Yakubu, INEC Chairman, of being the one delaying the election in Rivers and Bauchi states.

“Most of the states are having re-run, if not for governorship but for State or National Assembly. So, we don’t have anybody to blame at all.”

This online news platform understands that the PDP Chairman was reacting to the comment of the former governor of Niger State, Babangida Aliyu, who had said: “I think we must at the end of the day really come out and say something and do something for those members who habitually are absent in our meetings.

The opposition party Chairman warned that if the nation lost confidence in the judiciary, the country was finished.

He noted that inconclusive was a terminology created by INEC and All Progressives Congress (APC).

On his party, Yakubu Dogara, Speaker of the House of Representatives, said what happened during the election was pure evil.

He added: “Our consolation as members of this party is that evil does not last and no evil doer has ever escaped punishment. If they do what others have done before, they will see what those who done evil saw. Definitely, they cannot escape from it. It’s a law of nature and in the scripture of God, whatever you sow so you shall reap.”

His words: “I want to use this opportunity to remind INEC that we should escape the trap of always getting Nigeria to be slanted as bad when they are looking for example of a bad precedent.

“Elections are done all over the world, elections are conducted in Africa and at no time have we heard of this inconclusive election in other jurisdiction. Ghana’s elections were held not long ago,” he added.

Speaking also, Peter Obi, the PDP vice presidential candidate and former governor of Anambra state, said the biggest shame in the election goes to those directing INEC and security agencies to do wrong.

His words: “As for me, while we blame the INEC and the security agencies, the biggest shame goes to those who are directing them to do the wrong thing.

“If you chose to be a leader, especially with APC that claims integrity, the biggest corruption and the biggest show of a government that does not believe in integrity is to rig election because the process through which you come into office is far more fundamental than what you do thereafter.

“I think we should hold them responsible for what is happening in this country now. The examples we are setting for the young ones, I don’t know what they will tell a young man who is cheating in an exam in this country after seeing the ways our elections are conducted.

“I don’t know what they will tell those who are robbing banks and kidnapping people, because we have seen the biggest of it by this election where people are happy after robbing the nation and their states.”

On his party, Bukola Saraki, the President of the Nigerian Senate, said if anybody believed that the election was a loss to PDP, it was actually a loss to the country that history will not forgive.

“I think this victory that the other party has seen is going to be short-lived. We have a great future ahead and I believe we will start that on Saturday to make sure that we defend those five states that are declared inconclusive.

“We have done an election that no doubt anybody and even those that think they have won are ashamed of, the kind of election that we did. I think it is a shame to the country and to those that were given that responsibility to do,” he said.