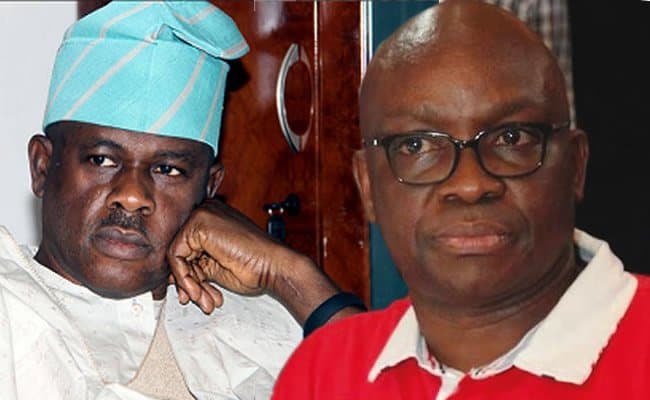 The court, however, admitted the dead man’s statement.

Fayose is facing charges of N6.9 billion fraud leveled against him by the Economic and Financial Crimes Commission (EFCC), alongside a company, Spotless Investment Ltd, on 11 counts, Naija News reports.

At the resumed hearing of the case, Obanikoro who is the fifth witness, told the court, while being cross-examined by second defence counsel, Mr. Olalekan Ojo (SAN), that his Special Assistant (SA), Erukaa, died in an accident two years ago.

Ojo had asked Obanikoro: “Do you remember your statement on Exhibit G2 made on October 8, 2018?”

“I will have to see that to acknowledge,” replied the former minister.

After being showed the exhibit, the following encounter occurred:

Ojo: “In exhibit G2, you specifically stated that you were not privy to any discussion between the first defendant and the former NSA.”

Obanikoro: “That is correct.”

Ojo: “I suggest that because you were not privy to any such conversation, you can’t on your oath tell the court any date or time of such alleged conversation.”

Ojo: “In the same Exhibit G2, you categorically said that Justin Erukaa died after he had made Exhibit J.”

Ojo” “This Justin Erukaa who was one of your Special Assistants, can you tell the court how you got to know about his death, after making Exhibit J.”

Obanikoro: “He left Lagos a day before Sallah about two years ago, and the Police called one of my SAs that the owner of the phone just had an accident and died on the spot, and he immediately called me and informed me.”

Ojo: “Do you remember on February 4, you told the court that you could not recall whether or not Justin Erukaa made any statement to the operatives of the EFCC?”

Obanikoro: “It is a statement.”

Ojo: “Whose name appears as the maker or author of Exhibit J?”

Ojo: “Did you attend the burial of Justin Erukaa?”

Obanikoro: “I was there with my family.”

The court, however, admitted the extra judicial statement of the late Erukaa, which was marked Exhibit J.