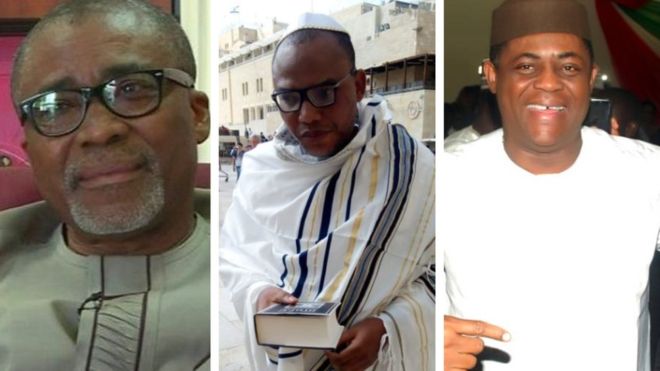 A Federal High Court sitting in Abuja, Nigeria's capital, has struck out a suit filed against Senator Enyinnaya Abaribe, Femi Fani-Kayode and others over the whereabouts of Nnamdi Kanu, the leader of the proscribed Indigenous People of Biafra (IPOB).

Naija News reports that case was struck out by Justice John Tsoho for lacking in diligent prosecution.

Justice Tsoho noted that the plaintiff's counsel was in court at the last adjourned date, yet, he failed on Tuesday to appear in court or give an explanation for his absence.

"I, therefore, agree with other reasons adduced by the Learned Silk and hereby strike out the suit for want of diligent prosecution," the judge held.

This online news platform understands that when the case came up on Tuesday, even though all the parties were served including the plaintiff, he neither responded nor appeared in court.

Naija News recalls that one Mr Isaiah Agidi Ayugu had approached the Federal High Court, seeking leave for application of Order of Mandamus, compelling the respondents to immediately investigate the circumstances surrounding the disappearance of Kanu from the country, whereas the Nigerian Army had been accused of abducting, arresting and assassinating him.

Ayugu approached the court following the sighting of Kanu by the Wailing Wall in Jerusalem last year.

Displeased with the development, the plaintiff sought an order mandating the respondents to prosecute all that was indicted in aiding Kanu to allegedly evade justice.

Meanwhile, respondents in the suit marked FHC/ABJ/CS/1254/2018 include the Inspector General of Police, the Nigerian Police and Department of State Security Service.

In November 2018, both Abaribe and Fani-Kayode had sought to be joined in the suit as interested parties.

Naija News understands that the joinder application was granted by Justice Tsoho on January 11 after which the respondents filed a preliminary objection on March 6, praying the court to dismiss the suit for constituting an abuse of court process.

The duo had through their counsel, Chukwuma-Machukwu Ume SAN also asked the court to dismiss the suit on the ground that similar case going on in charge No. FHC/CR/383/2015.

Abaribe and Fani-Kayode posited that the suit was hypothetical in nature and did not disclose live issues to be litigated upon and that it tends to engage the court in an academic exercise.

The senator is one of the sureties for Kanu and following the raid on Kanu's village home in September 2017, his whereabouts became unknown.

Consequently, when Senator Abaribe was asked by the court to produce Kanu for the continuation of the trial, he blamed the military for Kanu's disappearance.