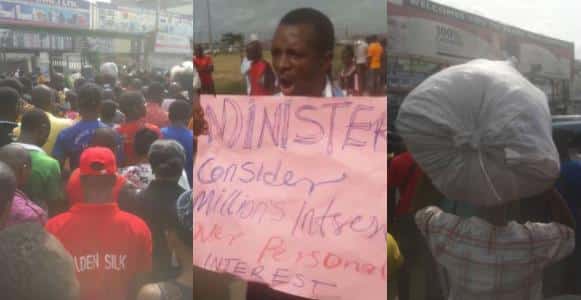 Traders in a popular market have on Monday taken to the streets in Lagos in a peaceful protest.

Naija News understands that the traders who were said to be mostly dominated by the Igbos, were armed with placards of various inscriptions to protest the alleged closure of the popular and busy trade fair in Lagos.

The traders alleged that the Lagos state government closed down the trade fair in Lagos where they make their ends meat.

All the associations in the international trade fair were said to have joined the protest.

According to a Twitter user who shared the activities of the protesters on his Twitter handle, the protesters are protesting against the forceful takeover of the complex by Lagos state government.

The social media user identified simply s Chibuzor wrote in his post; “All market association in international trade fair complex has suspended activities today to protest against the forceful take over of the complex by Lagos state government.”