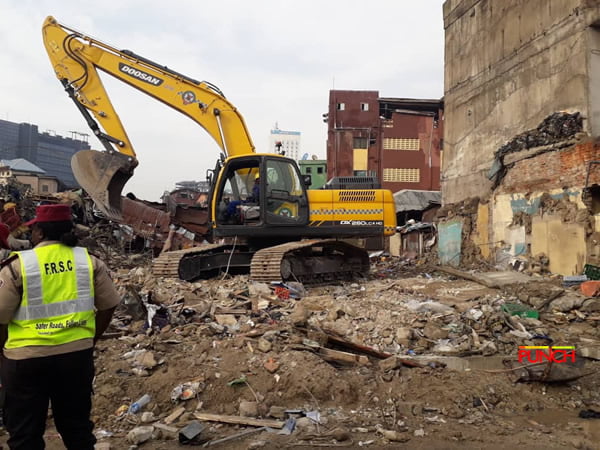 The Lagos State Building Control Agency (LASBCA) has commenced the demolition of several defective houses located in the Lagos Island.

The agency started its operation with the demolition of a three-storey building located in Epetedo area of the state early on Friday, March 15, 2019, and added that about 180 affected houses will also be demolished.

The agency’s General Manager, Lekan Shodeinde, disclosed that 20 similar defective buildings will be demolished on Friday.

Naija News recalls the development is coming on the heels of a building collapse located at Massey Street, Opposite Oja, Ita-Faaji, which came down around 10 am on Wednesday, March 13.

Up to 100 people were reported trapped in the building collapse as relevant agencies battled to bring out survivors including pupils of a private nursery and primary school occupying the building’s third floor.

At least 18 people have been confirmed dead as a result of the collapse, and up to 41 injured persons are already receiving treatment in the hospital.

The Lagos State Emergency Management Agency (LASEMA) General Manager, Adesina Tiamiyu, disclosed that the building had been marked for demolition since 2014.

Similarly, on Wednesday, Lagos State governor, Akinwunmi Ambode while visiting the scene, said that buildings within the vicinity of the collapsed building would be subjected to integrity tests.

“This area and building here will be undergoing an integrity test. As you can see some of the buildings have been marked for demolition.