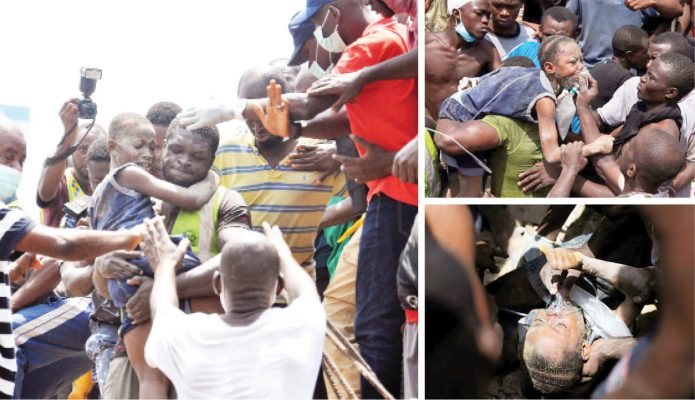 More details have emerged in the developing story involving the fatal death of pupils after the collapse of a school building located in a three-story building at Ita-Ifaji, Lagos Island.

Naija News reports that it was all tears as parents visited the collapsed building with several pupils feared trapped in it and rescue operation still in progress.

According to the National Emergency Management Agency (NEMA) eight (8) pupils died in the disaster.

Speaking on the incident, NEMA Public Relations Officer (PRO), in the South West Region, Ibrahim Farinloye, said that 37 others were rescued from under the debris by rescuers.

He said that the team will also visit victims at the hospital.

The list of survivors by yesterday evening included 22 females and 17 males. The list stated two teachers and three adults, indicating the rest were children.

Forty-three persons, including tenants, had been rescued from the rubble by yesterday evening and rushed to the General Hospital, Lagos, while many others, mostly school pupils, were still trapped in the ruins, rescue officials told Daily Trust.

The bodies of the dead, which reportedly included that of a pregnant woman, were deposited at the General Hospital mortuary.

A set of twins who were pupils of Baden Private Primary School, located at 10, Dagara Street, Ita-Faji was also retrieved from the building.

The school occupied the second and third storeys of the collapsed building, with a penthouse also part of it. Shops, offices and a business centre occupied the ground floor.

Some residents in the area, however, describe the address of the building as 14, Massey Street, Ita-Faji.

There was confusion with regard to the correct name of the school itself.

While some neighbours called it Baden, others said it was Ohen Nursery and Primary School. Whatever sign that could confirm the school’s name, and even the right address, had been destroyed in the debris.

It was gathered that the school had an estimated population of 170 pupils, most of them in classes when the building came down.

Teachers on duty in the classes were also said to have been trapped in the ruins.

There were indications that the owner of the building, one Akinmoladun, was among those rescued from the collapse.

His son, Erinoluwa Akinmoladun, told rescuers he had alerted his father earlier that morning about how weak the building was and its possibility of collapsing soon.