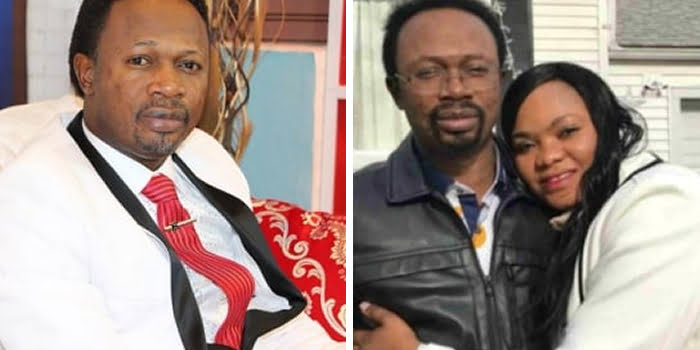 The pastor in charge of Bride Assembly in Lagos, Moses Alu, has condemned Prophet Joshua Iginla over his confession of infidelity which he claimed his wife of 13 years, Yemisi Iginla committed and led him into divorce.

Speaking in a church programme on Tuesday, Pastor Alu said Iginla was only deceiving his followers, saying “he can bewitch his members but cannot bewitch those who know the Christian faith.”

The cleric noted that Prophet Iginla was not remorseful but only came out to publicly to humiliate his wife because she refused to cover up his own sin.

“A Pastor came out in Abuja and said he is making a confession and at the end of the confession, he told his followers that he is divorcing his wife. A Pastor? See the difference between him, Benny Hinn and Oyakhilome,” he said.

“Oyakhilome came on the air and said the woman desires divorce but he doesn’t want it because the Bible doesn’t permit it. Benny Hinn also said he agrees with his wife regarding her grievance but he is praying and asking people to help him talk to his wife, that she should change her mind because the Bible will not allow him to divorce his wife.

“Listen Iginla, go back and reconcile with your wife. and to start with Iginla, you were not confessing. That was no confession. There was no posture of a contrite spirit. There was no posture of a repentant heart. You were moving from left to right in the same way you preach sermons. You cannot put up the same posture when you want to make a confession of a sin you have committed.

“You can bewitch your members but you cannot bewitch those of us who know the Christian faith.

“I don’t have a problem with you committing sin. I am looking at what you call confession. You were arrogant in your presentation of your confession.

“You claim you are out to make a confession but you said the reason you came out to confess is that when your wife did her own you covered her but now you did your own and she found out and she is not ready to cover you. The Bible says he that covereth sin shall not prosper.

“I read comments of people saying he is a humble man of God. Let me tell you when you commit sin, it is who you have sinned against that you go to confession. You went and committed adultery, does the church need to know that? You broke your marriage vows with your wife. You are to go before your wife.

“Listen Iginla, instead of you to confess the sin you committed against your wife, you went ahead to open her own up. You were saying she too she did it. Is it your business to say that? Is that confession? You were coming out publicly to rubbish your wife. Because your wife is going about complaining what has happened, you in your arrogance you are telling your wife, ‘I will finish you.

“You are talking about my own, I Will go on air and talk about your own’. And he was ending his speech by shouting Holy Ghost Fire. Fire on your wife? Iginla, go back and settle with your wife. You need counseling”.