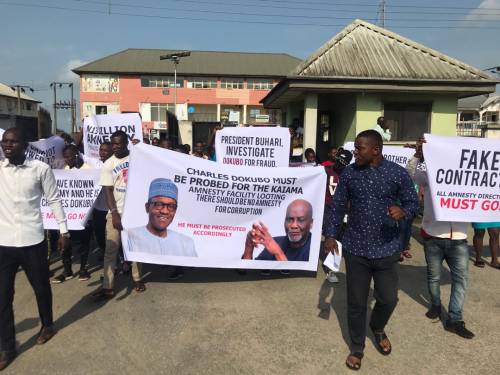 A group known as the Concerned Niger Deltans for Sustainable Development (CNDSD) has called for the sack and probe of Professor Charles Quaker Dokubo, the Special Adviser to the President on the Niger Delta and Coordinator of the Presidential Amnesty Programme.

CNDSD based its call on the alleged looting of the Amnesty Vocational Centre at Boro Town, Koluama/Opukuma Council Area of Bayelsa State, a property estimated at over N60billion.

The looting of the facility lasted five days, with no police or military personnel on ground to stop the hoodlums. The incident occurred in February.

Kingsley John, who led a protest in Yenagoa, the Bayelsa State capital, said Dokubo has questions to answer.

He said: “We humbly call on the father of our country, and our President Muhammadu Buhari, GCFR, to have Professor Charles Quaker Dokubo, Coordinator of the Presidential Amnesty Programme, step aside for criminal investigation to commence into the uninterrupted five days’ looting of the N60billion Boro Town Training Complex including non-existent supply contracts, persistent stealing, fraud, corruption, and intimidation of whistleblowers and other stakeholders at the Niger Delta Amnesty Office.

“Professor Dokubo directed the head of the Boro Town Vocational Training Centre, Mr. Jude Gbaboyor, to open the warehouse where supplied items are kept and they arranged with hoodlums to cart away items previously supplied to cover up their fraud. The move was to enable Dokubo, his front men and the director of procurement, and other senior management staff in the Amnesty office to claim that the N13billion worth of supplied items have been stolen by hoodlums.

“Prof. Dokubo later called Mrs. Esther Boro, the daughter of the late Ijaw hero and legend, Major Isaac Jasper Adaka-Boro, to commission the facility on his behalf. While the looting was going on at one end, Madam Esther Boro and a few elders she gathered were commissioning the facility at another end in the same complex, all on February 14, 2019.

“Prof. Dokubo waited for almost one month after the looting before setting up a fraudulent committee to investigate the looting. However, the people of Kaiama and Niger Deltans know the truth that Prof. Dokubo orchestrated the looting to cover-up his non-existent supply contracts of N13billion as reported in the media.”