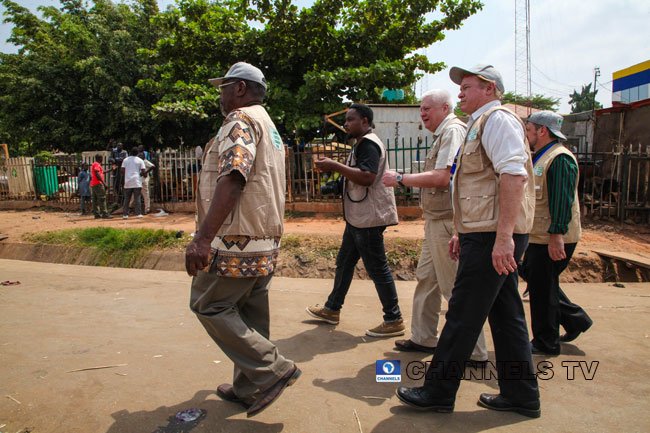 A coalition of election observers, under the aegis of Coalition of Civil Rights Movement (CCRM), has hailed the military’s exceptional conduct during the recently concluded Gubernatorial and State Houses of Assembly Elections in Nigeria.

There were calls from certain disgruntled quarters for President Muhammadu Buhari to withdraw the military following the completion of the Presidential and National Assembly elections.

Despite the pressure, however, the president remained resolute and held firm, Naija News understands.

In a preliminary report released by CCRM at Abuja, the Executive Director, Evelyn Agu disclosed that after a thorough analysis of the polls, the various groups under the Coalition absolved the Nigerian military of any wrongdoing, especially in Rivers and Akwa Ibom states.

See The Full Report Below:

On March 8, 2019, Nigerians in the various states in the country went to the polls to elect their leaders at the Gubernatorial and state houses of assemblies for the next four years. As expected, there were apprehensions as regards the safety of lives and properties and the role of the relevant security agencies in ensuring that the electoral process was devoid of violence.

The Coalition of Civil Rights Movement in line with its mandate set in motion machinery to monitor the polls in the various states by deploying grassroots observers across the different local government areas in the country. Consequently, attention was given to the preparedness of the Independent National Electoral Commission (INEC), the major political parties, the actions and inactions candidates of the various political parties as well as the intervention of security agencies, before, during and after the elections.

The Gubernatorial and state houses of assemblies’ elections held simultaneously across states in Nigeria. The Independent National Electoral Commission (INEC) smarting from the just concluded presidential and National Assemblies elections, recorded remarkable improvements in terms of logistical arrangements across the states.

Cases of the late arrival of sensitive electoral materials were minimal and a significant improvement from the previous elections. Our observers at the various polling stations across the country recorded a time lag of between 15 to 20 mins between the arrival of INEC officials and the commencement of accreditation and voting. This time lag accounted for about 85% in the various polling units across the states. In states with difficult terrains and hard to reach areas, there was a time lag of between 30 to 45 minutes. And this accounted for 25% of the states.

INEC officials at the various polling units were less apprehensive due to the presence of security personnel’s that were in strategic places to ensure the safety of lives and properties during the polls, and consequently the general conduct of the elections by INEC was commendable and displayed a commitment to ensuring a credible, free and fair elections.

The mode of distribution of sensitive materials by INEC was commendable and left room for manipulation by the various political parties. But for a few instances especially in the hard to reach areas with difficult terrains that strains of sensitive election materials in transit were tampered with by political thugs.

There was also a large turnout of observer groups who were duly accredited by the Independent National Electoral Commission, at the various collation centres across the states. In some states, it was observed that some groups brandishing identity cards as observers were denied access because INEC did not accredit them and therefore access could not be granted to them. Akwa Ibom, Rivers and Zamfara states recorded led with scores of unaccredited observer under various nomenclatures.

Some of these groups identified with some political parties during the voting process and therefore their credibility was called to question by security agencies for the fact they could produce their accreditation tags which were a requirement for access to the collation centres.

The Gubernatorial and state house of assemblies’ elections were mainly contested by two parties (The All Progressive Congress and the People’s Democratic Party). Lots of political horse-trading were recorded in most of the states, especially in states that recorded political upsets. States like Akwa-Ibom, Zamfara, Rivers, and Gombe, accounted for activities that almost marred the electoral process but for the quick intervention of security operatives.

The All Progressive Congress in most of the states deployed party agents at the various polling units, likewise the People’s Democratic Party. It was observed that other parties made few representations at the different polling units for inexplicable reasons.

There was noticeable tension between agents of the APC and the PDP in the majority of the polling units and some instances some of the political party agents refused to append their signatures to the citing foul play, which in our opinion were not based on facts but for mischief purposes.

This trend was also transferred to the collation centres where final results were being collated. This caused a bit of tension that forced the collation officers to suspend collation to address the grey areas.

Some of the Local Government Areas that witnessed such scenarios are listed below:

In this LGA, agents of political parties in cahoots with unknown observers tried to disrupt the process by citing complicity on the part of INEC officials. The tensed atmosphere was almost degenerating before the military was called in to restore law and order. The military demanded accreditation tags entry is granted to the collation centres. Those that were duly accredited were allowed access, and those without accreditation were denied access.

The same scenario played out in this local government area. Party agents of a particular political party were unruly and attempted to disrupt the whole process. They tried to take hostage INEC officials, and this was met with stiff resistance by the military and the police.

Eleme LGA witnessed a very tensed exchange between agents of the PDP and the AAC. This almost degenerated into a brawl forcing the suspension of the collation by INEC and the drafting of additional security personnel to the collation centre. The uproar the ensured mandated the security operatives to form a barricade around the collation centre and party agents and observers dispersed for normalcy to return.

Access was consequently denied to political party agents, as well as observers. This, however, did not go down well with the observers who insisted on gaining access to the collation centre. The plea by the military for normalcy to return fell on deaf ears.

In Gokana LGA, the case was outright harassment of INEC officials by political thugs of a particular political party. The thugs brandished dangerous weapons and shot sporadically in the air at the collation centre. The military was also drafted in to protect the INEC officials who were already terrified by the activities of the political thugs.

Collation was subsequently suspended and the collation centre barricaded by the military.

In Tsafe LGA, collation was disrupted by armed men who stormed the collation centre chanting slogans of a political party and threatening to abduct INEC officials should the result not favour their party. INEC officials were harassed and intimidated by these group of party supporters forcing collation activities to be suspended. Security operatives that consisted of the army, police and civil defence to restore order.

This resulted in the suspension of collation activities in the Tsafe LGA collation centre.

The Role of Political Actors:

It was observed that in most of the states that witnessed disruption in the electoral processes is partly because of the actions and inactions of some candidates who displayed a high sense of desperation and in instances where electoral victory is not guaranteed, their party agents were mandated to disrupt the process for it to lose credibility. This scenario was rampant in Rivers State where a particular candidate threatened to kill should the election not go in his favour.

Some other candidates tried to influence INEC officials with money to turn the results in their favour. Security agents were also induced with money. In the case of Rivers and Akwa-Ibom states, it was rampant, but there were no recorded cases of the security operatives taking sides in return for monetary gains.

The Role of the Military:

The role of the military in the electoral processes across the various states can be described as a timely intervention. In the states as mentioned earlier, (Rivers, Akwa-Ibom, Gombe, and Zamfara) the police were overwhelmed with the activities of political thugs that mandated the drafting in of military personnel to maintain the integrity of the process.

In all the collation centres monitored by our observers, the military performed the role of back-up to the police and civil defence operatives. They were mostly drafted in times of extreme escalation of hostilities. In places were the collation of results went smoothly, there was a presence of military operatives that stood guard to ensure that there were no cases of harassment and intimidation.

It is therefore instructive to state that the role of the military in the gubernatorial and state houses of assemblies’ elections was invaluable and also commendable. They displayed an apolitical stance throughout the process, but for instances where there was an exchange of gunfire between the military and some armed political thugs in Rivers state. They indeed professionally conducted themselves.

It can be thus said that the gubernatorial and state houses of assemblies’ elections were generally peaceful and orderly but for some states that witnessed skirmishes that required the drafting of the military to maintain law and order.

The posture of President Muhammadu Buhari throughout the elections indicates a non-interference and a level playing ground for all candidates regardless of party affiliations. This is quite commendable and an indication that democracy would thrive under the present administration.