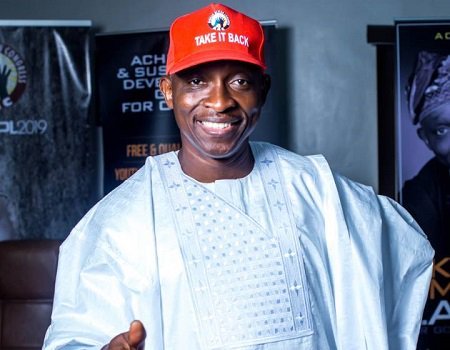 Laosun , Optimistic That He Will Win The  Governorship Election

Governorship Candidate of the African Action Congress (AAC), in Oyo State, Mr. Omololu Laosun has expressed optimism of winning today’s election to emerge the next Governor of the State.

Laosun who voted at polling unit 34, Ward 12 opposite Ibadan Eid praying ground in Ibadan North East Local Government Area of the state revealed that he will emerge the winner in the ongoing gubernatorial election taking place across the 33 local government areas of the state.

Speaking to journalists shortly after casting his vote,  he stressed that the electorate in Oyo state will decide who they wanted as their next Governor in the Saturday poll.

He noted that the Saturday governorship election will be about the “capacity and integrity” of candidates who are jostling for the Agodi Government House in Oyo state from May 29 this year.

Laosun said, ” Alliance is only being formed by some people who are in a small mushrooms political parties and it was probably because they did not get the ticket of their party and feel the next thing is to go and form an alliance.

“But, let me tell you that the alliance is just a clever thought strategy to form a ring in with the candidate who will eventually emerge as governor and their motive is to loot the state treasury together”.