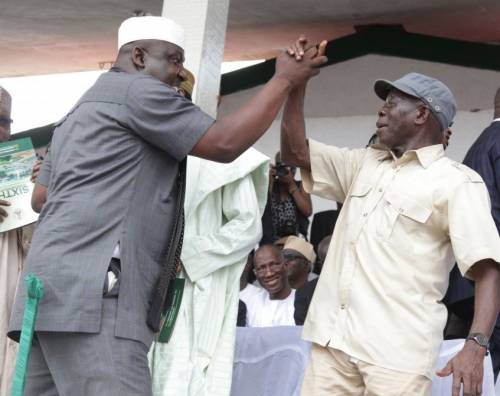 The Imo State chapter of the All Progressives Congress (APC) on Saturday said the suspension of Governors Rochas Okorocha and Ibikunle Amosun was null and void.

At a press conference in Owerri, the APC chairman in the state, Daniel Nwafor, called on the National Chairman of the party, Adams Oshiomhole, to tender his resignation letter for suspending the governors of Imo and Ogun states.

Nwafor accused Oshiomhole of disregarding the constitution of the ruling party since he emerged the national chairman of the party.

He noted that the state chapter of the APC would not honour the “purported suspension” of Okorocha from APC, Nwafor said that the former governor of Edo state had outlived his usefulness in APC.

Nwafor said that the APC national chairman was known for not obeying court orders and judgments.

The Imo APC chairman said that according to the party constitution, the suspension of any member starts from the ward level and not from the National working committee.

Nwafor said: “I am here with the APC chairman from Ogboko ward where the governor hails from. There was no letter from the NWC to him to query the governor for any offense. The truth is that Oshiomhole is a man who has no respect for rule of law. He has a penchant for disobeying valid court judgments and orders.

“We demand his immediate resignation from APC. Adams Oshiomhole has outlived his usefulness in APC. As a party, we will not honour that purported suspension. It is null and void and of no effect. Governor Rochas Okorocha remains the leader of APC in Imo state.”