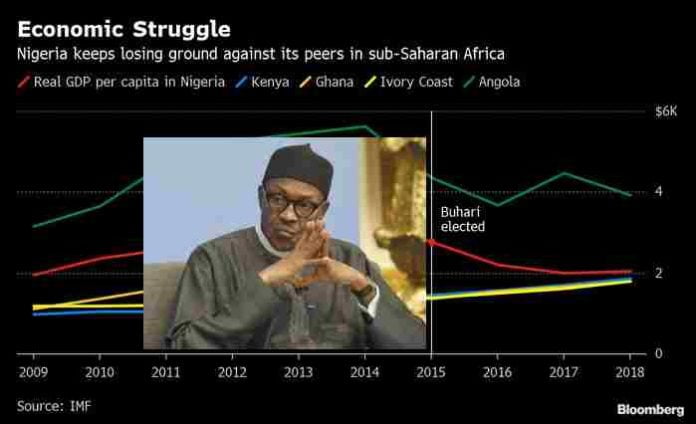 It will be recalled that Naija News had earlier reported that President Muhammadu Buhari and Vice President Yemi Osinbajo were presented certificates of return by the Independent National Electoral Commission after defeating the main opposition, Alhaji Atiku Abubakar of Peoples Democratic Party, PDP.

However, according to a post published on its website, Bloomberg.com, with the title; “A Buhari Win Would Limit the Growth Rebound in Nigeria”, the publication gave an analysis that Buhari’s win will spell bad for the Nigeria GDP per capita against its peers in Sub-Saharan Africa.

“If President Muhammadu Buhari wins another four-year term it will probably mean more political interference in Nigeria’s economy and slower growth, according to research by Bloomberg Economics.

“The opening of the Egina offshore oilfield this month and the Dangote refinery next year will deliver a near-term boost, but low capital investment is likely to inhibit growth over the medium term.

“BE (Bloomberg) expects Nigeria, Africa’s largest oil producer, to keep losing ground in real GDP per capita against its peers in Sub-Saharan Africa.

The question remains, what would happen to Nigeria’s GDP per capita as President Buhari has been declared winner of 2019 presidential election?