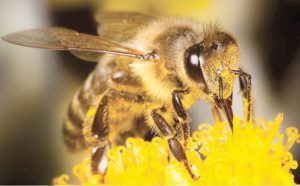 The world’s largest bee, Wallace’s Giant Bee, which went extinct since 1981 has been found in the wilderness of Indonesia by an international team of scientists and conservationists.

The search team successfully rediscovered the species in January in the North Moluccas, an island cluster in Indonesia, a statement published by the University of Sydney today stated.

With a wingspan of 6 centimetres and a body the size of a human thumb, the bee, formally known as Megachile pluto, was first discovered by English entomologist Alfred Russel Wallace in 1859 and was not observed again until 1981.

Biologists do not know much about the Giant Wallace bee except that it has really large mandibles and use/ form large balls of tree resin and wood to build their nest.

Since it was last seen, “Goliath of bees’’ had remained elusive to scientists despite several expeditions trying to find it.

Before the latest rediscovery, scientists had feared the species was already extinct due to drastic deforestation in its habitat as Indonesia lost 15 per cent of the tree cover between 2001 and 2017, according to Global Forest Watch.

“Amid such a well-documented global decline in insect diversity, it’s wonderful to discover that his iconic species is still hanging on,’’ said Simon Robson, a member of the search team and a biologist at the University of Sydney