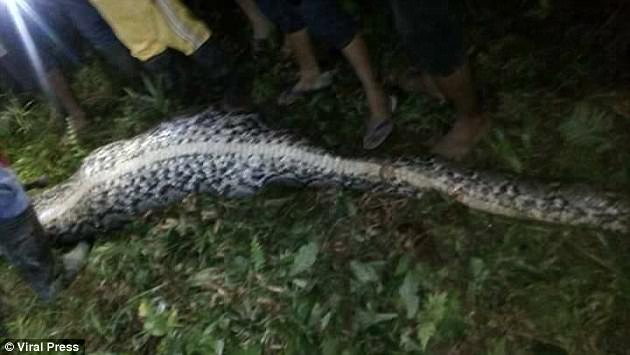 Man Allegedly Kills A Phython On The Run From Arrest

The Manager of Imo State Zoological Garden, Dr Francis Abioye, has warned Nigerians that the killing of protected animals including reptiles like python would attract a jail term.

Abioye gave the warning today when he mobilized members of the zoo task force to arrest Mike Uzoma a resident of Nekede autonomous community in Owerri West Local Government Area of Imo who allegedly killed a python.

The area where the python was killed is less than a kilometre away from the zoo.

However, by the time the task force members got the community to effect the arrest, the suspect had fled.

The manager who addressed members of the community cautioned them against such actions, explaining that all animals around the conservation area are protected by law.

Abioye warned that anybody who kills a python or any animal protected by the law will be arrested and prosecuted.

“I have come to educate all of you against the habit of killing animals that are protected by the law.

“Anybody caught killing such animal must be jailed because we cannot continue to watch people destroy our nature out of ignorance”, he said.

Abioye said rather than kill such animals, the residents should contact the zoo curator to capture them.

Some of the residents, who spoke, commended the manager for coming to educate them on why some special animals must be protected.

One of them, Mrs Angela Amaefula said she was ignorant of the law prohibiting the killing of some animals like python, and urged the zoo manager to make such enlightenment programme a regular event.

According to her, doing so would enable members of the public to become fully aware of the need to be friendly with such animals.