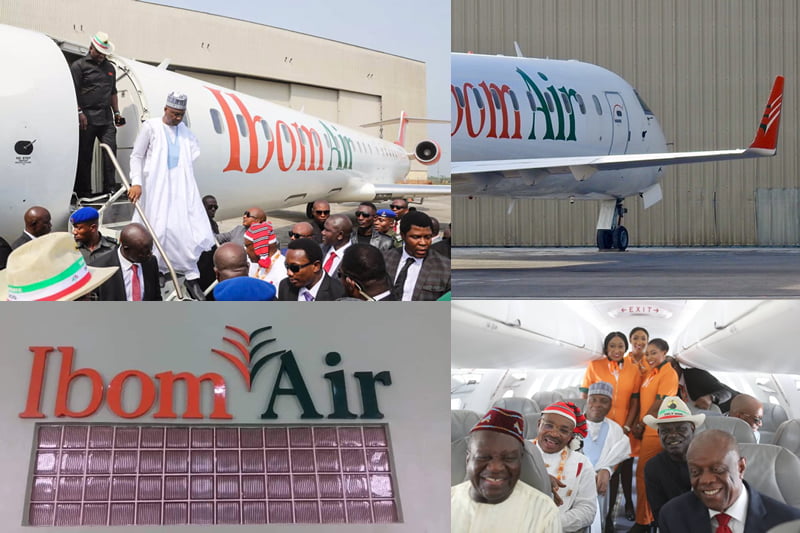 The government of Akwa Ibom State has launched the Ibom Air with two aircrafts unveiled by the Bukola Saraki, the President of the Senate President.

Naija News reports that the Akwa Ibom State government under the leadership of Governor Udom Emmanuel launched the airline on Wednesday, February 20.

Speaking at the launching of the aircrafts at the Victor Attah International Airport today in Uyo, Governor Emmanuel said the airline was a monumental achievement in the state.

The State governors said the aircrafts, identified as C-FWNK, are only six years old with a sitting capacity of about 90 persons and constitute the newest and modern fleet of the Canadian Airbus.

Speaking further, Emmanuel said Akwa Ibom is the only state in the country to run a state-owned airport and run an airline, adding that the government is running Ibom Air as a business.

The Akwa Ibom governor said Ibom airline will operate routes that would give preference to Akwa Ibom people, and that the government would soon launch one of the best terminal buildings in this country.

Emmanuel said the government has strived to focus development of the economy on land, air and water, noting that so far, the state government has constructed over 1,000 kilometres of roads across the state.

The governor added that one aircraft will arrive on Friday in addition to the already unveiled two aircrafts.

He further said plans for the Ibom deep seaport will soon commence operations before the expiration of his second term in 2023.

His words: “The launching of Ibom Air is a monumental achievement in Akwa Ibom state and indeed Africa. The journey to achieve Ibom airline started in 2016 and today, it is a reality.

“I want to reassure the former governor, Obong Victor Attah that very soon, the MRO will be a place that will maintain fleets of aircrafts across the country.

“We are running Ibom Air as a business, paying particular attention to Akwa Ibom people,” he said.

On his part, Saraki, who unveiled the aircrafts, commended the leadership qualities of the state governor, noting that he has been able to create an environment viable for development.

His words: “Today, we celebrate leadership; we celebrate the good things that can come out of Nigeria; we celebrate the audacity of hope. The governor has created an environment for people to have jobs. We are proud of you in the PDP family that you are one of us”.

A former governor of the state and initiator of the airport project, Obong Victor Attah commended the governor for carrying on the project he started, adding that he was happy that the governor was running the state as a business.

“I thank God that we have Governor Udom Emmanuel who has deemed it necessary to carry on the project we started years ago.

Also speaking, Chairman, Ibom Air, Idongesit Nkanga, said with the launch of the aircrafts, the State Governor has shocked critics with his managerial prowess.

Nkanga noted that the airline will boost the realisation of the MRO facility within the region, adding that there is no stopping the visionary and industrial initiative of governor Udom Emmanuel.

“The government has taken the right steps. Ibom air will employ 300 people but 3,000 people will be involved in Ibom Air at one time or the other, excellent managers have been selected,” he said.