The Anambra state command of the Nigerian Police has apprehended two persons in connection with the stealing and selling of a four-year-old girl in the state. 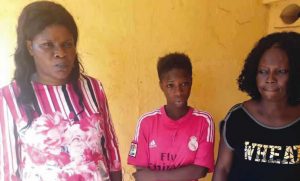 Naija News reports that the Anambra police gave the names of those arrested at Ngozi Ede and her daughter, Kosiso who were said to have connived to sell the minor for N250,000 at Awada, Obosi, in the Idemili North Local Government Area of the state.

While confirming their arrest, the Police Public Relations Officer in the state, Haruna Mohammed, assured in a statement obtained by Naija News that the baby had since been recovered and handed over to her parents in good condition.

“The suspects conspired and stolen one Mesoma Ikoko, aged four years, from the custody of her mother, one Nneka Ikoko, of the Mammy Market, Army Barracks, Onitsha.

“Preliminary investigation further led to the arrest of one Ifeoma Okeke, aged 45 years, who collected the child from the above-mentioned suspects and handed her over to one Ifeoma Okonkwo of Eke Nkpor.

“The stolen baby has been recovered in good condition and handed over to her mother. Consequently, the sum of N250,000 suspected to be part of the proceeds of the illicit transaction was also recovered as exhibit.”

Haruna Mohammed added that the case was under investigation after which the suspects would be prosecuted.

He urged Parents in the state on the need to carefully look after their wards so as to avoid the re-occurrence of such in the state.

He, however, reinstated the commitment of the state police towards ensuring a crime-free society.