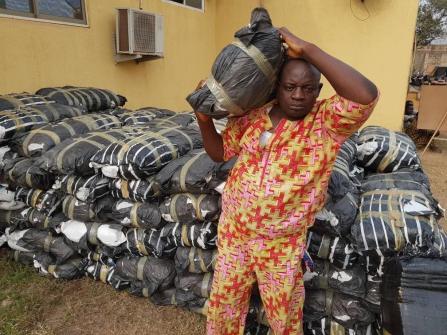 An Indian-hemp peddler identified as Saheed Mudashiru has bagged a five-year jail term for peddling 3.5 kg of Indian Hemp (Cannabis).

The presiding judge of the Federal High Court in Ibadan, Justice Joyce Abdulmaleek on Monday, February 18 convicted and sentenced Mudashiru to prison based on the overwhelming evidence against him.

In her judgement, the Judge said; “To sustain the war against drug trafficking in the Nigerian society, this court has no option than to impose stiffer punishment on offenders to serve as deterrent to others.

“Therefore, Mudashiru is sentenced to five years in prison without any option of fine.

“The sentence however, starts from the date the convict was first arrested.

“The weed exhibit found with Mudashiru shall be destroyed by the National Drug Law Enforcement Agency (NDLEA),” the Judge said.

The Counsel to NDLEA, Oyo State Command, Raphael Himinkaiye, had said that the convict was facing a one-count charge bordering on unlawful dealing with Indian Hemp.

Recall that Himinkaiye further informed the court that Mudashiru had engaged himself in the crime on June 7, 2017, at Mokola Area of Ibadan, Oyo State.

According to the Counsel, the convict was apprehended with a sack of about 3.5 kg of the illicit drug.

Himinkaiye reminded the court that the offence contravened Section 11 (C) of the NDLEA Act Cap N0 30 Law of the Federation, 2004.

In a similar development, Naija News had reported that some NDLEA officials were killed by unknown gunmen while carrying out their duty during a roadblock.

The operatives of the NDLEA were killed after they were attacked while carrying out their duty in a checkpoint along Ikaro/ Sabo road in Ondo state.