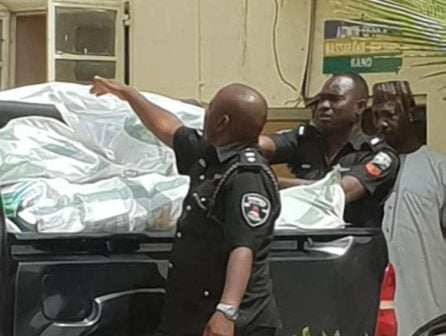 Operatives of the Sokoto state police command have apprehended one Shehu Maidamma for allegedly being in possession of ballot paper.

The Police Public Relations Officer (PPRO) in the state, ASP Muhammad Sadiq, confirmed the development while briefing newsmen on Monday, February 18 in Sokoto.

Naija News reports that Sadiq in his statement obtained by the news platform, alleged that the specimen ballot papers retrieved were produced and circulated buy the Peoples Democratic Party (PDP) in the state.

In his words, the police PRO said; “the police wish to clear the air on the rumour going round the state on the arrest of a person in possession of ballot papers.

“A team of police patrol on Sunday arrested one Shehu Maidamma in possession of suspected ballot papers produced by the PDP.

“As such I urged the members of the public to remain calm as all security agencies are working closely with INEC to ensure free, fair and credible elections across the country,” he said.

While confirming the arrest, the INEC spokesman in the state, Malam Muhammad Musa, also confirmed the authenticity of the papers. Musa said that the papers were specimens and not original.

Musa who re-emphasized that campaigns had stopped since 12:00pm on Friday, also said: “political parties have the right to enlighten the voters on election process.”