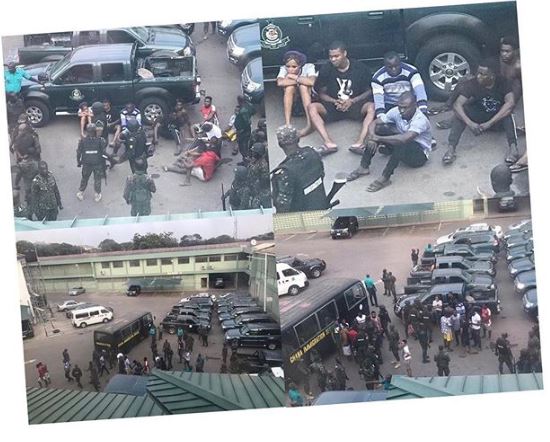 Operatives of the Ghana Immigration Service (GIS) have apprehended some Nigerians during a clampdown in Ghana.

Naija News reports that the GIS apprehended the Nigerians during a nation-wide clampdown on landlords and property owners in Ghana.

The arrest of Nigerians residing in Ghana was followed after a viral video showing about 5 immigration officials under attack by persons suspected to be Nigerians at Kasoa in the Central Region of the country.

In a statement obtained by the news platform, the GIS alleged that some properties that were rented by some foreigners that had no immigration status have become the hideouts of cyber fraudsters and other criminals.

“The use of such properties by persons who are illegally residing in the country make such owners liable of the offence of harboring an illegal migrant, as stipulated in Section 52(1)(b) of the Immigration Act 2000 (Act 573),” said a release signed by Comptroller-General, Kwame Asuah Takyi.

“Section 52(1)(b) states that, a person who knowingly harbours any person whom he knows is to be deported or has reasonable grounds to believe has acted in contravention of this Act commits an offence and is liable on conviction to a fine not exceeding GHS1,000 or imprisonment for a term not exceeding two years or both,” the statement added.