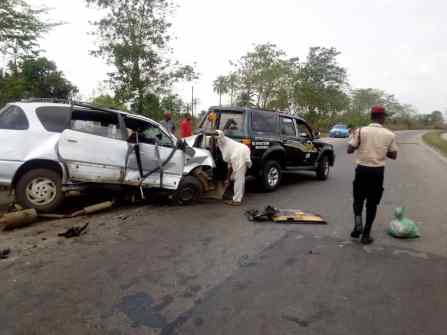 Eight persons have been confirmed dead while two others have been left with various degrees of injuries after an accident along Lagos-Abeokuta Expressway.

Naija News reports that the accident that happened in the Ewekoro axis of the road and involved a blue Toyota Corolla Sports car and left a pregnant woman and a child severely injured.

The accident occurred after the driver conveying 10 persons lost control of his car due to overspeeding.

Confirming the incident in the area on Sunday, the Spokesperson, Traffic Compliance and Enforcement Corps (TRACE), Babatunde Akinbiyi, said the accident occurred around 12:50, and claimed 8 lives out of the 10 persons who were onboard.

“We learnt that the Toyota Corolla Sport vehicle was inbound Abeokuta on the Lagos/Abeokuta Expressway when the accident happened.

“The driver of the Toyota marked AKD 649 FP, who was drunk and on excessive speed lost control of the vehicle and rammed into a stationary trailer parked on the road.

“Though the driver of the trailer was not in the vehicle when the accident happened, he reported and is presently at Ewekoro Divisional Police Station with the vehicles involved,’’ Akinbiyi said.

Akinbiyi said the remains of the deceased had since been deposited at the General Hospital Morgue in the Ifo Local Government Area of the state, while the pregnant woman and the minor boy who sustained injuries were responding to treatments in the Federal Medical Centre (FMC), Idi-Aba, Abeokuta.

He said the injured pregnant woman and a boy were receiving medical treatment at the Federal Medical Centre (FMC), Idi-Aba, Abeokuta.

Election Postponement: Prophets Claim Prophecies Are Confirmation Of Their Calling