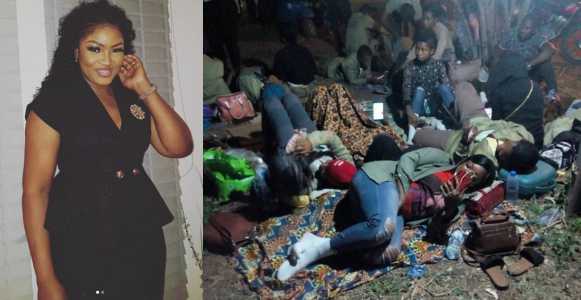 Popular Nollywood actress, Omotola Jalade has joined other well-meaning Nigerians and celebrities who have expressed their various reactions over the postponement of the elections initially slated to hold on Saturday, February 16.

Naija News understands that the popular actress also took out time to express her anger over the abandonment of members of the Nation Youth Service Corp (NYSC) who were mobilized for the election duty.

Naija News had earlier reported that the Corpers were left stranded across various parts of the country as they arrived polling units on Friday, February 15, ahead of the election that was later postponed by the Independent National Electoral Commission (INEC).

In her reaction, Omotola slammed INEC for not making proper provisions for the Corpers who were made to suffer in the cause of serving their fathers’ land.

Omotola in her reaction also blamed the parents of the Corpers for not preparing their wards well-enough for the tax ahead of them. She re-emphasized the need for the Corpers to love themselves, stressing that self-love remains a crucial key to eliminate degradation.

In her words, Omotola said; “‘I still maintain what I said about this program some years Ago. Is this compulsory? Why do you accept to do this and put yourself in harms way? Why do parents Allow their children do this? INEC is this how you should threat ppl’s children “serving” Nigeria? #NYSC’.

She added that, ‘until we are all individually ready to be defiant and stand against injustice and degradation, these Abuses won’t stop. It starts in the Mind. Rise above the excuses, the “pity me” , ” its hustle” , ” its poverty” syndrome . You’re worth More. What more can I say. Im exhausted,” she said.