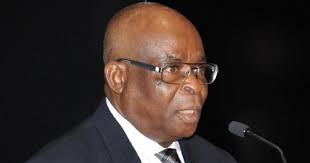 Recall a warrant of arrest was issued against him on Wednesday by Danladi Usmar-led tribunal after he successively failed to appear before the tribunal after he was accused of non-declaration of assets that culminated in his suspension by President Muhammadu Buhari.

Naija News understands that Onnoghen is now in the premises of the tribunal and has appeared in the dock after alighting from his official Prado SUV.

Security arrangement has been beefed up around the premises as well.