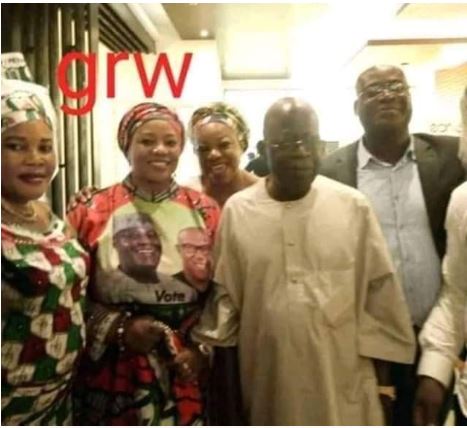 Spokesperson to the national leader of All Progressives Congress, Asiwaju Bola Ahmed Tinubu has narrated how some PDP supporters, led by the former spokesperson of Department of State Services, Marilyn Ogar, cornered the former Lagos governor at the Airport and begged him for a selfie which is now being used for blackmail by the opposition party.

According to Mr. Tunde Rahman, Tinubu’s picture with the PDP women leaders has gone viral and is now being used by PDP social media ‘warriors’ to indicate that the national leader of APC may be thinking of dumping his party ahead of Saturday’s presidential election.

“Yesterday on our way to Abuja, APC Leader, Asiwaju Tinubu, bumped into some PDP stalwarts at the Private Terminal of the Murtala Muhammed International Airport, Ikeja.

“These people who included ex-DSS Spokesperson Marilyn Ogar sought for a selfie with Asiwaju. Because he knows Ogar well and because of his mature politics, he allowed what he thought was a seemingly innocuous request.

@AsiwajuTinubu can't be trusted.. He is a traitor and a snake.he shouldn't be allowed to cross to @OfficialPDPNig.. He can't try to be a snake in the day and a rod in the night. He should stay clear and see himself humiliated this time @YouthsForAtiku

“Now, Marilyn Ogar and PDP elements have turned this noble gesture depicted in the photograph below into a piece of propaganda machinery and an instrument of blackmail.

“They even want to place this photograph as an advertorial in Newspaper in their desperate attempt to smear Asiwaju and curry support. The photograph has been turned into an instrument of blackmail. This is sad indeed.

“With the way she is using this photograph, Marilyn Ogar has sunken low. Many who were there saw how they forcefully demanded the photograph and Asiwaju obliged them even without his trademark cap. Please ignore their propaganda.

“There is nothing more to the photograph than an acceptance of a seemingly harmless request for a photograph”, he stated.