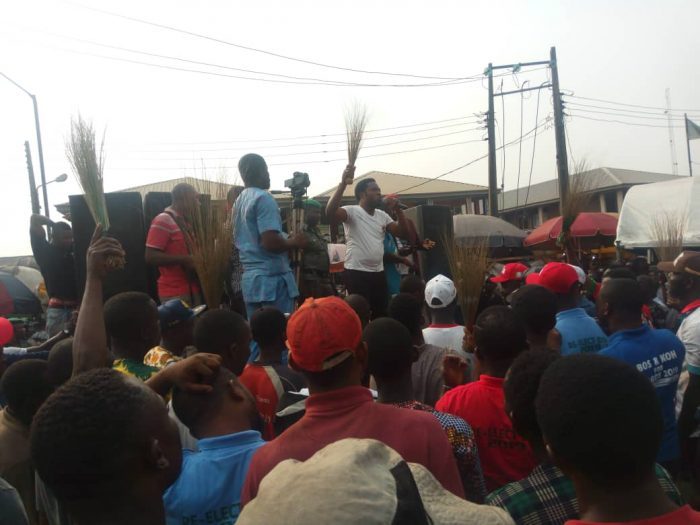 Traders at the popular Ladipo market in the Mushin area of Lagos have declared their support for the ruling All Progressives Congress (APC) and the flag bearer of the party, Babajide Sanwo-Olu.

Hundreds of traders have in their numbers stormed the streets in a sensitization campaign around the market on Wednesday, February 13, where they declared their total support for the APC candidate.

In a statement made available to Naija News, the Spokesperson of the traders and convener of the campaign, Chris Onyekachi urged the traders to come out in their large numbers to vote for Sanwo-Olu in next month’s governorship election in Lagos.

“We believe in Sanwo-Olu and we have educated our people to collect their PVCs and many of them have collected. We have been educating them in several meetings and today, we are on ground to create awareness on the need for them to vote this weekend and in the governorship election next month.

“This is Lagos State and this is where we do our business. We have to do what is right and sitting at home will not help us. Vote for Sanwo-Olu in next month’s election,” he said.

In a similar vein, the President General, Ladipo Auto Spare Parts Market, Jude Nwankwo called on the traders to vote massively for Sanwo-Olu in next month’s election.

Nwankwo recalled that the traders refused to vote for Ambode in 2015, but that the governor surprised them by keeping to his promise that he would not close down the market during his tenure.

Nwankwo furthered that Sanwo-Olu had also promised them that he would not shut-down the market during his tenure despite several indications that the that the state government might finally close the market.

Nwankwo pledged the support and votes of about 400,000 traders in the market.

This is coming in few days after Naija News had earlier reported that the Lagos state government is making plans to shut-down the popular market in Lagos.

The Lagos Waste Management Authority (LAWMA) declared that it would shut down the market over the poor management of waste in the market.