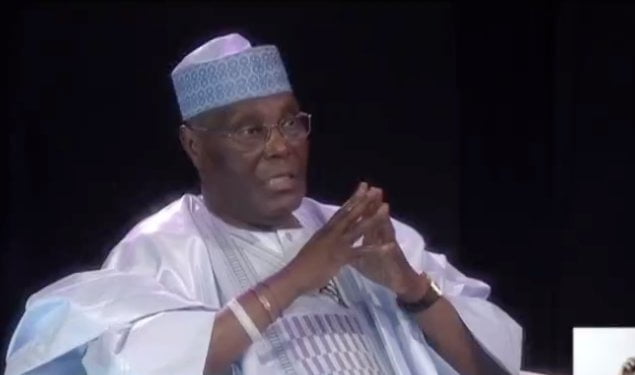 Atiku Promises To Make Lagos The Commercial Capital Of Africa

The Peoples Democratic Party (PDP) presidential candidate Atiku Abubakar has reeled out promises to supporters in Lagos state, particularly promising to make the state the commercial capital of Africa if he becomes President in the Saturday elections.

Address a cheering crowd at the rally held at the Tafawa Balewa Square (TBS), Lagos, venue of the PDP presidential rally, Atiku said as a Lagos boy, he passed through the hustle and bustle of the Centre of Excellence.

The PDP candidate added he had never reneged on any promise, noting he would restructure the country and ensure true federalism.

A vote for him, he said, is a vote for job security and end to unemployment.

“I am not like the All Progressive Congress (APC) that makes empty promises. I promise Nigerians that I will restructure the country; I will do it.

“I promise to create jobs, I will do it. Today, the country is writhing in insecurity. Initially, insecurity was limited to the Northeast but had spread to the Northwest and Northcentral.

“I promise to reverse all these trends. I promise to work with the National Assembly, protect the judiciary and respect the rule of law, if I become the President.

“You also saw for yourself when President Muhammadu Buhari came to Lagos, all the trailers disappeared on the Ojuelegba and Apapa bridges, but immediately he left, they come back. It means the traffic issue in Lagos can be addressed.”

On his part, the PDP National Chairman Uche Secondus said the party was sure of victory on Saturday. He noted that the trend of the PDP rallies across the country was favourable.

“Today, we are in the Centre of Excellence and commercial nerve of Nigeria. You saw what happened in Kano, Katsina, the Northwest, Northcentral and Southwest. Everywhere PDP campaigns, the whole place was shut down.

“The man the PDP is putting forward is competent and can do the job. He will bring his full ability to rescue the country. Our financial and business climate will boom again.”

Also in agreement, the fore speakers, Senate President Bukola Saraki said a vote for Atiku is a vote for a better life and economy.

He noted that when Atiku is given the mandate on Saturday, the country would start a new journey for progress.

He said the PDP candidate had the capacity to revamp the economy and hence, create massive jobs for citizens.

Saraki claimed that the APC government had brought sufferings to the country, urging Lagos residents to reject the ruling party at the polls.

Atiku’s running mate Peter Obi said the PDP was the best bet for the country’s progress and the citizens’ well-being.

He urged Nigerians to cast their votes for the party on February 16 and March 2 “for a better Nigeria”.

In his remark, Agbaje, in his speech, said the PDP and Atiku had solutions to all the problems bedeviling the country.

He said it was time Lagos State freed itself from what he described as the political hegemony of people with vested interests and embrace a government that truly cares.

He said if elected, he would deliver service and provides the real governance that residents deserved.

Director-General, Atiku Campaign Organisation Gbenga Daniel said some Yoruba, who had been in the forefront of restructuring have backed out.

He noted that Atiku was committed to ensuring the country was made better, noting that it would start manifesting immediately he was elected.

The Lagos PDP candidates contesting for the various offices were presented with the flag of the party at the campaign.