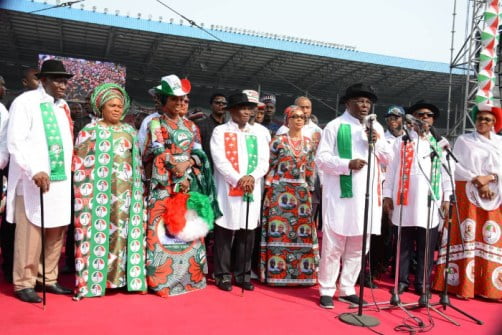 Nigeria’s former president, Goodluck and his wife, Dame Patient Jonathan have on Monday, graced the presidential campaign of the Peoples Democratic Party (PDP) in Rivers state.

The former president and his wife were accompanied to the event by the wife of the presidential candidate of the PDP Dr. (Mrs.) Jennifer Douglas Abubakar and wife of the President of the Senate, Dr. (Mrs.) Toyin Saraki.

While addressing the mammoth crowd that received the dignitaries, the wife of the PDP candidate, Mrs. Abubakar, urged women across the country to garner their support for the PDP come Saturday, February 16.

The wife of the presidential aspirant urged the women to mobilize their household to practice their franchise on Saturday. She urged the electorates to be vigilant and make sure that their votes are counted.

Naija News reports that the wife of Atiku stressed the need to vote out what she described as ‘incompetent’ government of APC, which according to her, “represents hunger, insecurity, economic hardship” and all manner of vices.

She assured women that the Atiku administration will not relegate them but will give them a level playing ground to unleash their potential.

“Avote for Atiku is a vote for a better Nigeria,” she said.

On his part, the PDP presidential candidate Atiku Abubakar, in his speech vowed to uphold the rule of law and protect the constitution of the Federal Republic of Nigeria.

In his words, Atiku said; “I assure you that I will protect the constitution, protect the separation of powers and will not interfere with the National Assembly and Judiciary because I believe in checks and balances.

“My administration will uphold rule of law and will never allow the rule of law to be trampled by anybody,” he pledged.

The PDP candidate made some promises before the Rivers state citizens. He also promised to complete the long-abandoned East-West road and create more job opportunities for youths.

In a similar vein, former President Goodluck Jonathan who also attended the campaign also drummed his support for Atiku. Jonathan said Nigerians are working tirelessly for the election of Atiku, and claimed that Nigerians believe he is capable of making Nigeria work again.