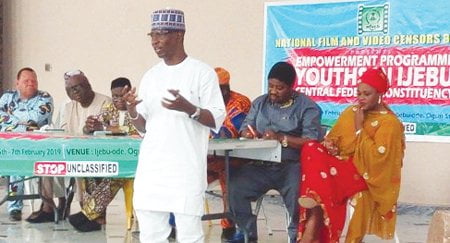 In line with its empowerment programme across the country, the National Film and Video Censors Board (NFVCB), has extended a start-up grant to 250 young film entrepreneurs in Ijebu-Ode, Ogun State.

The two-day event which began on Wednesday, February 6, 2019, at the Rontex Hall, Imowo Road, with a training session by seasoned industry practitioners and theatre arts lecturers offered participants insights into a successful career in film-making.

As he opened the session, the Executive Director of NFVCB, Alhaji Adedayo Thomas, said that the initiative was a deliberate effort by the NFVCB to bridge the gap between established industry players and upcoming ones across Nigeria.

According to him, all similar interventions and support efforts by either government or investors had been directed more at established names in the industry, with little or no support for new entrants.

His words: “As the key regulator of the Nigerian motion picture industry, the board has decided to bring practical knowledge of how to be successful in the sector to these passionate youths.

“As part of the empowerment initiative, we have brought experts from the academia and seasoned practitioners in the industry, to train these youths to enable them build a successful career in the sector.

“We do not only train them but we are also giving grants to 250 selected ones, as part of our efforts at assisting stakeholders in the industry, especially the young ones.

“This is to enable them start something or go for more practical training in the filmmaking business, by attending filmmaking courses in acting, script writing, directing and production,”

The training in Ijebu-Ode was the fifth in the series, following previous outings in Amuwo-Odofin, and Oshodi in Lagos; Port Harcourt in Rivers State, and Nnewi in Anambra State.

Adedayo explained that the board, under his watch would ensure that every Nigerian film-stakeholder got motivated, irrespective of the geographical divide.

“The NFVCB has operational offices in the six geo-political zones of our country, and from January we began this empowerment programme for all the zones.

“We decided to come to Ijebu-Ode, a town in the South-West for inclusiveness, outside the usual focus on state capitals.

“From that point, we shall follow-up on these beneficiaries to ensure they are well guided and mentored,” he said.

Professor Obafemi who spoke on Why Film is Key Aspect of Development advocated infrastructural and resource development of the industry, urging the government to take seriously, its economic diversification agenda, by enabling the creative industry to the degree of providing 30 percent of the country’s workforce.

Ojo-Bakare, while speaking on Exploring Dance and Music for a More Effective Film Industry in Nigeria, emphasizes the need to use more kinetic energy to generate interest of film lovers, averring that verbal narratives, being a cultural attitude, is the problem of most Nigerian films. He decried situations whereby dialogues override actions, just as soundtracks also break the suspense, adding that dance and music, could be injected to break unnecessary dialogues, using the Bollywood example.

Akinwale, whose talk at the event was centered on motivation, explore the theme, Film and My Life disclosed that his children and cousins are also doing well in the film industry noted that he had maintained passion and self-discipline on the job. He urged beneficiaries of the NFVCB grant to utilize the fund judiciously.

The seminar which was attended by several other film practitioners had the president of Theatre Art and Movie Producers Association of Nigeria (TAMPAN), Bolaji Amusan, aka Mr. Latin as a rapporteur.

Mr. Latin who was full of praise for the Executive Director of NFVCB, Alhaji Adedayo Thomas wanted the seminar extended to film associations, confessing that he learned new things from the session and that he was not ashamed to admit this despite his years of experience in the film industry.