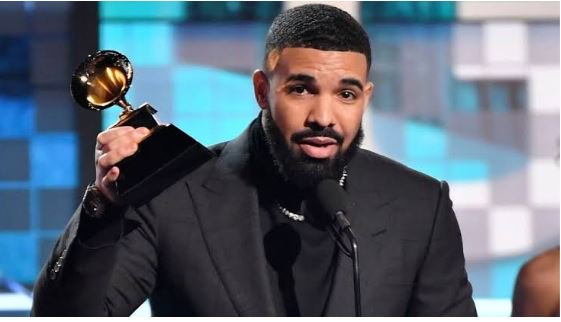 Read Drake's Speech At The Grammy That Attracted Lauding From Fans

Following the recently held 61st annual Grammy Awards which held on Sunday Over 480 thousand Twitter users have reacted to Drake's controversial acceptance speech at the event.

The rapper, who picked the Grammy for Best Rap Song for 'God's Plan', took the moment to address the imbalance in award nominations and awards.

He said, "I want to take this opportunity while I'm up here to just talk to all the kids that are watching this, aspiring to do music.

"All my peers that make music from their heart that do things pure and tell the truth, I wanna let you know we're playing in an opinion-based sport, not a factual-based sport.

"So it's not the NBA where at the end of the year you're holding a trophy because you made the right decisions or won the games.

"The point is you have already won if you have people who are singing your songs word for word if you're a hero in your hometown.

"If there are people who have regular jobs who are coming out in the rain, in the snow, spending their hard-earned money to buy tickets to come to your shows.

"You don't need this right here, I promise you that, you already won," he said, holding up his Grammy.

Following the speech, fans across the world, including Nigeria commended the rapper for speaking his truth and calling out award shows for their perceived bias.

Drake's speech at the #GRAMMYs
pic.twitter.com/ykpbyeB3WU

Drake's Grammy acceptance speech is everything we needed to hear pic.twitter.com/Ygrx0mX4wy

Drake speech at the #Grammys is definitely our #MondayMotivation pic.twitter.com/B2vekPvZFb

Drake's speech was really a motivating one to every hardworking person out there, awards doesn't make you the best, your true fans and people who love what you do is the best award you can ever wish for..#GRAMMYs pic.twitter.com/7fPslWhegG

Drake's Speech At The Grammys Was One Helluva Speech! Then He Got Cut Off By A False "Commercial Break"—My Point Is, They Don't Wanna Hear About The Obvious Racial Discrimination Against People Of Color Because It's Disgusting To Look At—Thank You Drake, We Heard You Loud Enough! pic.twitter.com/F72TUaFV32

Nicki was undefeated for more than a decade as a female rapper and still didn't get to have a Grammy and Cardi is just going to appear from nowhere a grab one??

Now we are going to act like Pink Friday and The Pinkprint never existed??