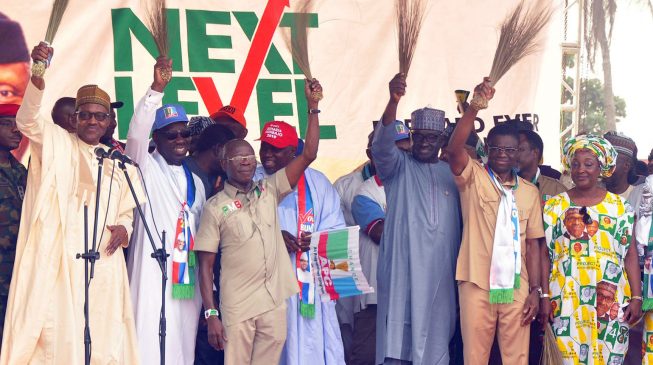 A mild drama occurred on Monday during the All Progressive Congress APC presidential campaign in Ogun state as the party’s National chairman, Adams Oshiomhole was jeered by the crowd at the rally.

The programme had kicked off officially after the arrival of President Muhammadu Buhari at the MKO Abiola Internmational stadium, Abeokuta after he had earlier taken his next level campaign to Kwara state before flying into Ogun.

Trouble however started when Oshiomhole was called upon to deliver his speech and suspected hoodlums booed him continuously and attempted to stone him save the intervention of security operatives at the campaign ground.

He was finally forced to end his speech abruptly after the programme was paused for some minutes but normalcy could not be restored.

The development angered the leaders of the party, including the national leader of the party Asiwaju Bola Tinubu.

The host governor, Ibikunle Amosun thereafter took the microphone to appeal to the angry crowd.

Watch a video clip of the happening below: