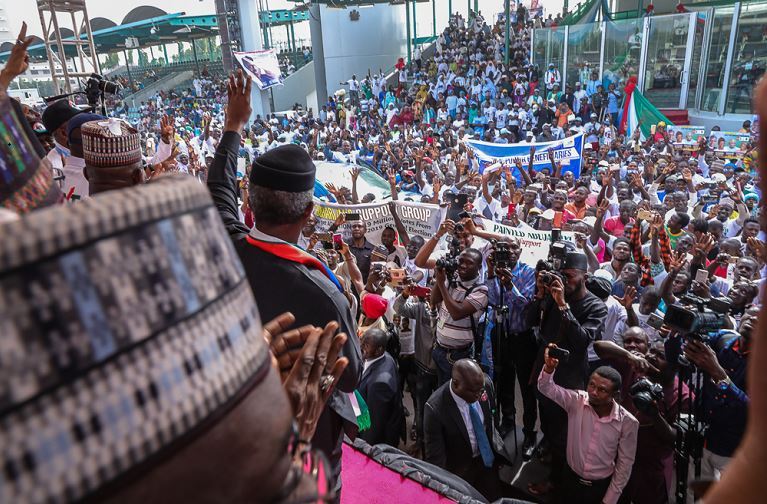 Vice President, Yemi Osinbajo on Sunday admonished Nigerians not to allow persons who had in time past looted the treasury of the country to return to power.

Osinbajo while speaking during a courtesy visit to the Oloja of Epe, Oba Kamorudeen Animashaun as part of the next level engagement, urged electorates to vote massively come Saturday, February 16.

The vice president urged Nigerians to shun the plans of some looters who he claimed are planning to regain power.

While citing the achievements of the President Muhammadu Buhari-led administration, the vice president reminded Nigerians of the several initiatives that had already been implemented by the government.

Osinbajo cited the initiatives of the government to create job opportunities as; as the N-Power, TraderMoni and Markey Money, among others, as well as provision of critical infrastructure.

In his words, Nigeria’s vice president said; “At the next level government, aside from all these initiatives, we also want to establish Entrepreneur Bank and Peoples Money Bank to complement the Bank of Industry. What we have realized is that we need to create several avenues for people to access funds to set up their businesses, and thereby create opportunities for more jobs. Already, we are in partnership with the Africa Development Bank (AFDB) to invest $500 million in creating jobs.

“All these things out to have been done before now, but corruption has prevented us from enjoying these things. We are at a point that we need to tell ourselves the truth because the country ought to have moved far ahead of where we are. If the leaders are corrupt, there is nothing that can move. It is not as if there is no idea to move this country forward. As a matter of fact, there are several ideas but corruption has refused to allow these ideas to come into fruition.

“Take for example, the Lagos-Ibadan Expressway; it did not take them three years when it was constructed but for 16 years, the PDP government could not fix it and they were budgeting money for the road every year. The APC government is now doing it with the right funding, the same thing with several rail projects across the country.“

While commending Governor Akinwunmi Ambode for the massive infrastructural renewal embarked upon by his administration in the Epe division, the Vice President assured that serious attention would be given to remaining roads connecting Lagos to Ogun State to facilitate ease of movement and boost commerce.

“I have to thank our Governor, Mr Akinwunmi Ambode who has shown a pattern of serious hard work. I have been here a couple of times with the Governor to see the infrastructural renewal ongoing here and I have to thank God for helping him to achieve this much for Epe.

“There is nothing we see here that is not good. Every of his project here is good and commendable,” Osinbajo said.

Also speaking, Governor Ambode, who also accompanied the vice president to embarked on door-to-door campaign in Epe, urged residents to troop out on election day and vote massively for all APC candidates.

“You know where my heart is. For me, it is four plus four. So, on February 16, it shall be APC all the way from Presidency to Senate and House of Representatives.

“Whatever you want to do because of me, just know that it is APC all the way from top to bottom,” Governor Ambode said.