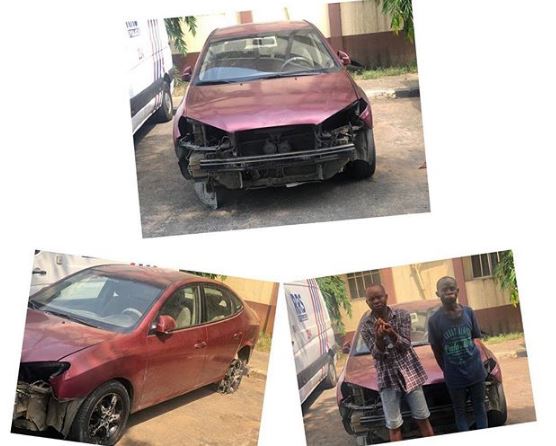 Operatives of the Rapid Response Squad (RRS) have apprehended two suspected robbers, suspected to have killed an Uber driver and stealing away his Hyundai Elantra.

Naija News reports that the names of those arrested by the RRS are; Humble Peter Robert, 33, and Gideon Achibong, 36, who were earlier arrested in Aboki estate, Lekki, Lagos, Nigeria’s commercial city.

The Lagos state command investigations revealed that Robert was an ex-convict and a bus conductor.

The police revealed that Robert, in the company of three others had in three days before their arrest, conspired to hijack an UBER car and sell it off.

On the said day, the Emma, David, Dolapo and Robert, at around 11:00 p.m, waved down the deceased, Sunday Obasi, in Lekki, and told him they were going to Ikate and he charged them N1,000.

As the driver was approaching their destination, the suspects were said to have excused the driver in the guise of wanting to ease themselves.

The Lagos police revealed that as the suspects came down of the car, they approached the driver, maltreated him and struck his head against a stone after which the driver bled to death. Haven committed the crime, the suspects were alleged to have disposed their victim beside the roadside.

Upon interrogation, Robert admitted having committed the crime.

In his words, Robert said; “I was sitting in front of the car with the driver. We seized and hit him with stones several times. Emma, also a UBER driver, is our ring leader.

He noticed that the driver was operating offline before deciding that we hijack the car from him. We contacted Archibong to assist us in disposing off the car. The buyers we invited indicated that they can only buy the car parts.

It was in the process of dismantling the car that RRS patrol vehicle spotted us and arrested two of us. Emma, Dolapo and David are on the run.”