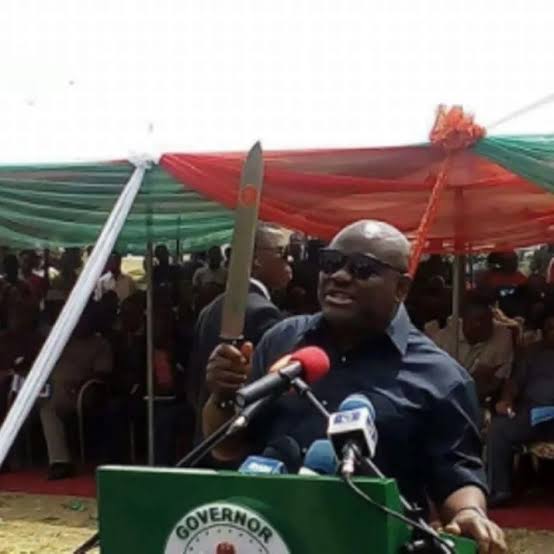 Nigerians have reacted to the actions of the River States Governor, Nyesom Wike,  who has threatened to cut down all member of main opposition party APC in the state with a machete.

With this Machete, I will destroy all the APC members in Rivers State”

Those who condemning El-rufai never see anything wrong in Wike pronouncement then, because whatever oppositions says or does can never be wrong, hypocrites.

For you all that reserved your partisan outrage, exclusively for El-Rufai’s “body bag” comment which (not putting it lightly) is like a drop in the bucket compared to Wike’s threat here?????? https://t.co/gFWunB5906

I kept asking why under buhari, is it that a yoruba man is always ready to defend an Hausa man? Yet an hausa man will never defend same Yoruba man. To correct your stupidity, pls note that the cutlass seen with Wike was a gift from the community as a sign of security awareness

Wike go and cut your family to pieces https://t.co/OZvj9SPUwc

@OfficialPDPNig will not report themselves to @EU@US
@UK@UN@ICC their collaborators but if @OfficialAPCNg sneezes, they will cry foul

@USEmbassyAbuja @realDonaldTrump and their western allies won't see this, seeing that they're all in alliance with d dollar man to invade Nigeria so their countries can continue getting Free stolen money 4rm Nigeria.

This video was a ceremony he attended in 2017, instead of admonishing El Rufai for making derogatory statement that may lead to electoral violence you are uploading videos to justify what he said.We are tired of compare and comparisme #LetsGetNigeriaWorkingAgain is the way ➡