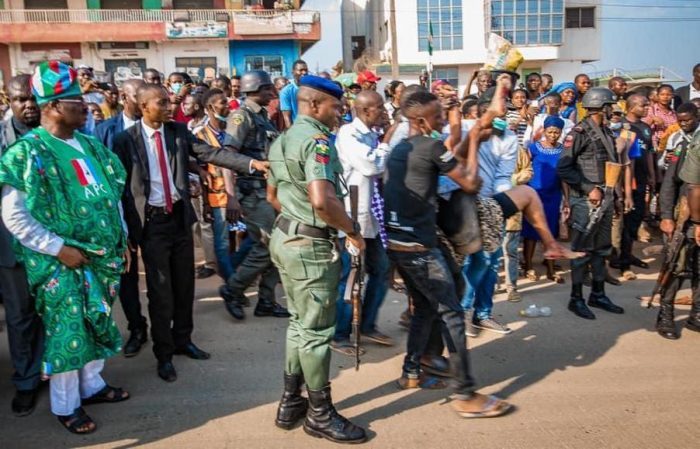 Tears were seen rolling down the eyes of residents, passers-by and onlookers in the Iwo-road axis of Ibadan, the Oyo state capital when the state governor, Abiola Ajimobi put his own convey to a halt so as to rescue some accident victims on the road.

The accident victims which includes a middle-aged lady and her motorcyclist were knocked down by a hit-and-run vehicle on the road.

According to the information made available to Naija News, the victims were left on the road in pains as the passerby and witnesses of the accident expressed fear that the Police might hold them responsible for the accident.

A source said that the victims didn’t get help from residents in the area because they were scared that the hospital might not agree to attend to the accident victims without a Police report.

“Everybody was afraid of going near them. A reckless driver who ought to obey the ‘drive slowly’ signs placed along the road because of the expansion works ignored the signs and drove recklessly into the area. He hit the motorcycle rider from behind and ran away. The rider and the woman he was conveying sustained serious injuries, which scared people from moving near them.

“We were surprised when the governor got to the scene after about 30 minutes and stopped. He watched as the victims were taken into one of the Hilux vans in his convoy. Many people that we consider as big men have passed through this place since the accident occurred without caring. Personally I’m impressed by the governor’s humanitarian gesture. That is why people who were watching started to hail him. He is an example of a good leader. I pray that other leaders will be as caring as this,” the source said. 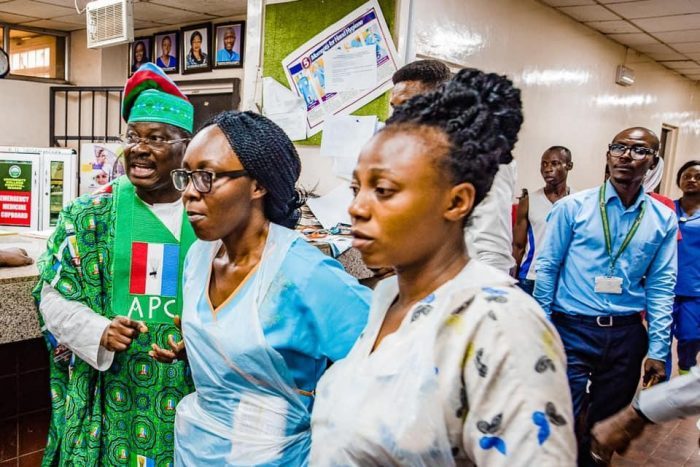 Governor Ajimobi at the hospital

The victims suffered some injuries in their heads and also sustained some bone fractures.

The victims were lucky enough that the governor was returning to the state after attending the President Mohammadu Buhari re-election rally in Ado-Ekiti, the Ekiti state capital.

On the arrival of the governor, Ajimobi came down of his convey, approached the victims who were lying down helplessly, and personally supervised his aides who carried the victims in his Toyota Hilux van and headed straight to the hospital.

The governor in his political party attires accompanied the victims to the state’s University Teaching Hospital where he personally made sure that their condition was stable before he left the hospital.