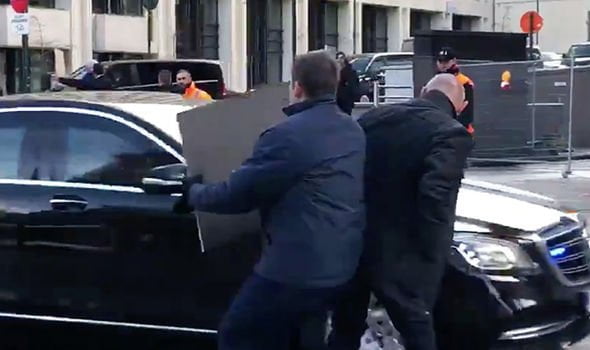 An anti-Brexit campaigner, Mark Johnston, earlier today jumped in front of Theresa May’s motorcade as she arrived at the European Commission headquarters in Brussels.

As previously reported by Naija News, the prime minister is in Brussels for Brexit talks with Donald Tusk and Jean-Claude Juncker

“Are you willing to get run over for Brexit?” a reporter asked Johnston after a short scuffle with security.“I’d rather the prime minister not crash out,” Johnston wryly responds, in reference to the placard he brandished at May’s passing vehicle.

May is hoping to secure concessions from the EU regarding the Irish backstop issue which has repeatedly scuppered negotiations and threatened her leadership on several occasions.

Exactly, i'm sure he wasn't going to jump in front of a moving car, he was just intending to stand in front of it once already stationary. As usual, security guards were over-zealous. Well done Mark J, if risky!

It will be recalled that European Council President Donald Tusk sparked outrage among prominent Brexiteers on Wednesday when he said: “I’ve been wondering what that special place in hell looks like, for those who promoted Brexit, without even a sketch of plan how to carry it out safely.”

During a joint press conference alongside Irish Taoiseach, Leo Varadkar, Mr Tusk urged Prime Minister Theresa May to head back to Brussels on Thursday with a “realistic suggestion” to resolve the Brexit deadlock.

The Eurocrat also warned Britain that the Brexit Withdrawal Agreement was “not open for renegotiation”.

He said: “I hope that tomorrow we will hear from Prime Minister May a realistic suggestion on how to end the impasse in which the process of the orderly withdrawal of the UK from the EU has found itself following the latest votes in the House of Commons.”