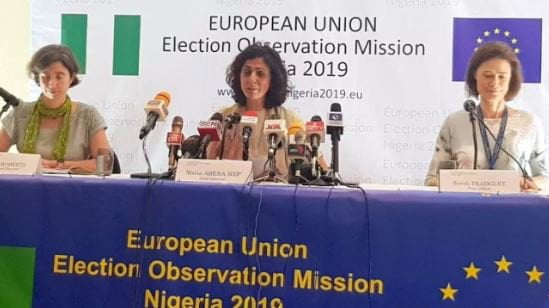 A team of European Union election observers, earlier today has reacted to a statement made by the Kaduna state governor, Nasir El-Rufai, saying the union had been invited since 1999 to observe elections in Nigeria.

Naija News learnt that the union was reacting to a statement wherein the Kaduna state Governor posited that “foreign powers” who may have been engaged by some politicians to interfere with the Nigerian general elections should jettison the idea otherwise, “they would go back in body bags.”

Mr. El-Rufai’s statement sparked reactions from different quarters, with the Peoples Democratic Party, PDP, threatening to pull out of the peace accord it signed for free, credible elections in the country.

Governor El-Rufai had made the statement while speaking during an NTA Live programme on Tuesday evening. His comment was in reaction to the recent statements by United States, European Union and the United Kingdom who showed doubts, saying the coming elections in Nigeria may not be credible.

The foreign bodies had accused the executive arm of the Nigerian government of undermining the democratic tenets and principle of separation of powers, citing the recent suspension of Justice Walter Onnoghen as the Chief Justice of Nigeria, CJN, by President Muhammadu Buhari.

But, disagreeing with them, the governor, who said Nigeria is an independent country, added that nobody would come to Nigeria and tell her what to do or how to run her affairs.

“We know their history, we also know their own stages of development and they went through these challenges. So, please, let us work together, let us challenge one another, but don’t lecture us.”

The threat by Gov. El-Rufai that foreign powers that interfere in our elections would go back in "body bags" is troubling & sickening. Are we in a jungle here? Are we murderers? We must stop "leaders" who think they have the right to say & do anything. @elrufai Represent us well!

Meanwhile, reacting to the Governor’s claims, the EU team said it would not be deterred from observing the general elections in Nigeria come February 16 and March 2 because it has had the invitation to do so since 1999.

According to a statement by the team’s leader, Sarah Fradgley, it said the EU will look at “all aspects of the election, including the campaign tone, the transparency of the election administration, the neutrality of security forces, and the independence of the judiciary.”

“We are aware of the comments by the Governor of Kaduna about non-interference by foreigners during a talk show on the elections Tuesday 5 February.

“The Independent National Electoral Commission invited the EU to deploy an observation mission for the 2019 general elections.

“While the security of EU observers is of paramount importance, and will remain under constant review, EU observers will continue their work across the country in the run-up to – and beyond – the 16 February elections.

“For the last month the mission’s team in Abuja, as well as 40 long-term observers across the country, have followed the elections. We have met with a wide range of candidates, parties, election officials, security agencies, and civil society organizations, and have enjoyed good cooperation at federal and state levels.

“The mission looks at all aspects of the election, including the campaign tone, the transparency of the election administration, the neutrality of security forces, and the independence of the judiciary.”

The question should be, was it not interference in Gambia when Buhari sent our military there in the course of their election without consent from @nassnigeria?