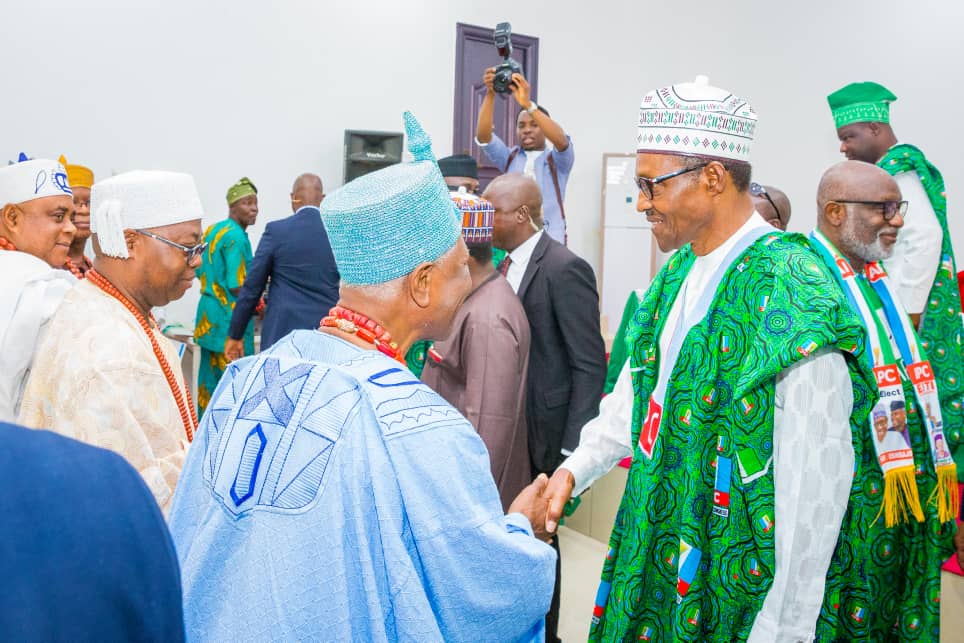 The Obas in Ekiti State, southwest Nigeria, have pleaded with President Muhammadu Buhari to fix the deplorable federal roads in the state.

Naija News reports that the monarchs made the plea on Tuesday in Ado Ekiti while interacting with the President when his presidential campaign train visited the state.

During the interaction, the monarchs in their position presented by the Secretary of the traditional rulers and Ajero of Ijero Ekiti, Oba Joseph Adewole, the monarchs appealed to President Buhari to appoint a Minister to replace Governor Kayode Fayemi in his cabinet to represent Ekiti.

The monarchs also urged the President to work hard to end the lingering strike by the Academic Staff Union of Universities (ASUU).

“We want you to remember us more. The federal roads in Ekiti are in a deplorable state and we want you to fix them and make them motorable.

You must also work hard to end ASUU strike, so our children can go back to school.

“We also congratulate you on the miraculous escape of Vice President Yemi Osinbajo in a helicopter crash in Kabba on Saturday. His escape showed that God has prepared him for a special purpose.

“Your success is our success, we assure you of our support in the arduous task to take Nigeria to the next level,” the monarchs said.

Similarly, the President while addressing the monarchs, said he has not betrayed the country on the promises he made in 2015 to secure the nation, fight corruption and diversify the economy and make Nigeria self-sustaining in terms of local production

President Buhari said his government had made landmark achievements since coming on board by ensuring that no town in the country is under the control of the Boko Haram Insurgency.

“Let me first thank the people of Ekiti for voting for Governor Fayemi in the July 14 election. I love the pattern of voting and I am pleased with it.

“When we were campaigning in 2015, we made some promises. Today, we have not reneged on them. As I speak with you, no part of the country is being controlled by Boko Haram. Before we came on board, 17 local governments were under the control of insurgents. We have technically retrieved those towns from them.

“The era when mosques, churches, motor parks were being bombed is over. We have also stopped the importation of rice by 90 per cent and we can now grow what we consume. Those who were engaging in acts of smuggling are being dealt with. We have now reached food security.

“Apart from all these, we are also fighting corruption. We introduced Treasury Single Account to curb waste, among others.

“I am now seeking your support so that we can continue to enjoy sustainable peace in our land. We hope to do more and that is why we are seeking the mandate of Nigerians so that we can consolidate the gains of democracy for our people,” the President said.

Meanwhile, the monarchs were led to the meeting by the Chairman of the State Council of Traditional Rulers and Oloye of Oye Ekiti, Oba Oluwole Ademolaju.