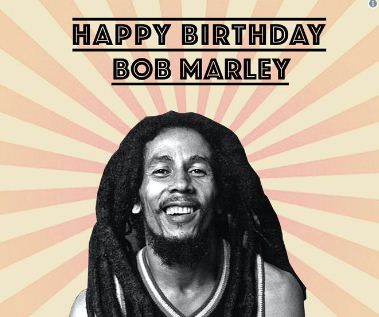 Reggae fans across the globe took to the microblogging site, Twitter, to remember the birthday of music legend Bob Marley.

The reggae artist would have clocked 74 if he was alive.

In July 1977, Marley was found to have a type of malignant melanoma under the nail of a toe.

This lesion was not primarily caused by an injury during a football match that year but was instead a symptom of already-existing cancer.

Marley died on 11 May 1981 at Cedars of Lebanon Hospital in Miami (now University of Miami Hospital) age 36.

February 6, 1945 — Bob Marley was born. He would have been 74 today pic.twitter.com/PjdCiBMywo

“The biggest coward of a man is to awaken the love of a woman without the intention of loving her~Bob Marley" pic.twitter.com/CoMaDLnwrH

Happy 74th Birthday to the reggae legend himself, Bob Marley!

On this day in 1945, legendary reggae artiste Bob Marley was born. His legacy and messages of peace and unity still live on.

"One good thing about music, when it hits you, you feel no pain." —Bob Marley

Happy 74th birthday Bob Marley. Forever in our hearts. You made reggae soothing for me #BobMarley pic.twitter.com/dzV0BRV6EK

Could you be loved – Bob Marley

Sending praise to Bob Marley on what would’ve been his 74th birthday. ❤️✊??? His message travelled across the world and united people. One Love still stands ?? pic.twitter.com/Qz1zN8stpI

On this day in 1945 – Bob Marley a Jamaican reggae singer-songwriter is born in Saint Ann, Jamaica #Happy73Birthday #bobmarley #happybirthday pic.twitter.com/RJGXmUU4hI

“One good thing about music, when it hits you, you feel no pain.” ~ Bob Marley #HappyBirthdayBobMarley pic.twitter.com/EomPcMmGOS

Bob Marley Would have been 74 years old today. Here is a rare photo of Him in Kenya , he stopped by en-route to performing at Zimbabwe's independence celebrations. pic.twitter.com/Ter7YQBEtL