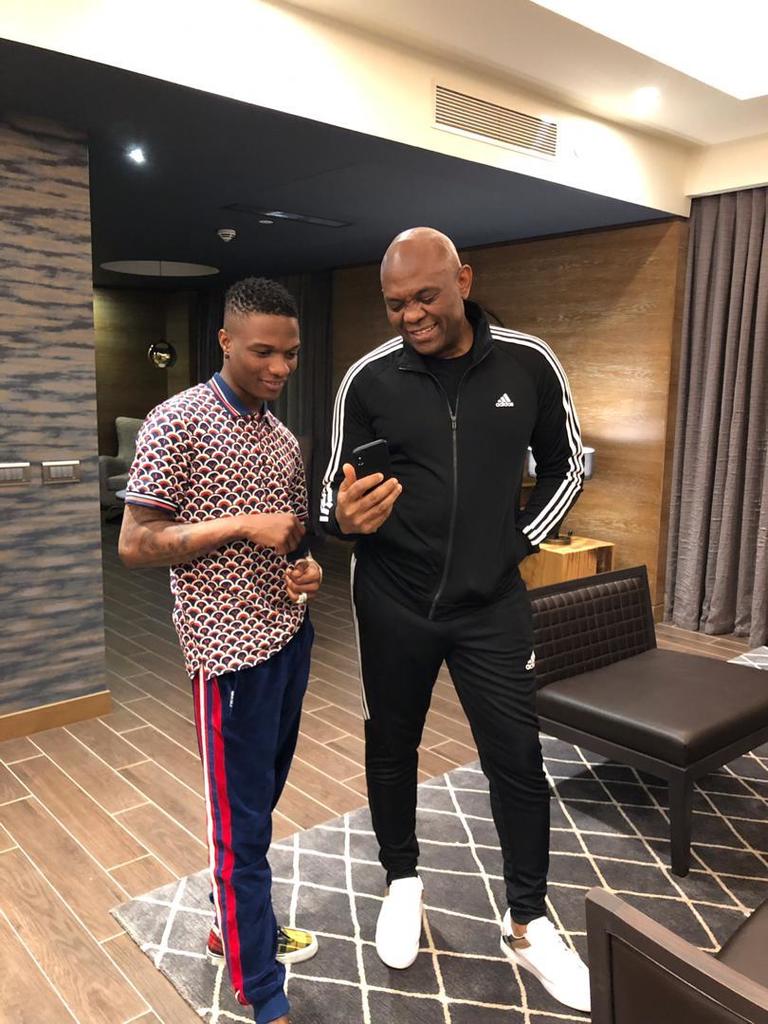 A storm of reactions by Nigerians has greeted a claim by a presumed fan of Wizkid that the Starboy record label boss might be richer than Tony Elumelu, the chairman of Heirs Holdings, the United Bank for Africa and Transcorp.

Naija News recalls that Wizkid met the billionaire businessman. The duo posed for photos just before the launch of UBA group in Mali on January 3 which got a lot of people talking.

Elumelu, who is the founder of The Tony Elumelu Foundation, had described the meeting as: “A quick chat with @wizkidayo before tonight’s show ahead of the @ubagroup ’s launch in #Mali” while the “Fever” crooner also shared a photo of the duo, calling their meeting a done deal in Mali.

Reacting to the picture, Miss Sofunyin, a presumed fan of Wizkid tweeted: “And why do y’all think tony Elumelu is richer than Wizkid?”

And why do y’all think tony elumelu is richer than wizkid?

Apparently displeased with the tweet Nigerians bounced on Miss Sofunyin and thereafter listed why Wizkid isn’t close to Elumelu when it comes to the duo’s net worth.

Naija News captured some of the tweets below…

All the people who compared Wizkid with Daddy Tony Elumelu need to have their brains checked. Are you mad? ? Can’t you see how Wizkid was folding his hand behind his back! Baba na father now

If i say this guy is overrated now,they we come after me.. pic.twitter.com/UlTplDdEhd

Davido's fans have finally made him trend ???

Wizkid's face when he hears Nigerians comparing his wealth with tony elumelu .
Wizkid: now uncle tony will not sponsor my concert again pic.twitter.com/KRQzbxVSt7

I don’t care in figures who’s richer between Tony Elumelu and Wizkid, the fact that Tony Elumelu is an economist, entrepreneur, and a philanthropist justifies wealth to me!

If I hear that wizkid is richer than tony elumelu again…what nonsense!!!?? pic.twitter.com/5wvNyNsg0W

Even if u see Wizkid for that picture him dey like person wey wan beg Oga Tony Elumelu??.. U people should have sense on this Twitter na.. pic.twitter.com/NUkuxYaYQI

A Wizkid fan on Twitter thinks Wizkid is richer than Tony Elumelu ?

I pray to have the kind of fans wizkid has. Wizkid fans think too high of him.. imagine comparing Tony Elumelu's wealth to wizkid's wealth. Tony Elumelu is richer than Wizkid, his family and all his ancestors.

If i say this guy is overrated now, his dogs will not let me rest.

Some Wizkid's fans on Twitter must be on some sort of Ekiti weed to think that Wizkid is richer than Tony Elumelu.

1hr with Tony Elumelu or a Week with Wizkid? ?

Meanwhile, Wizkid is believed to be worth about $12 million while Tony Elumelu’s net worth stood at $700 million in 2015.