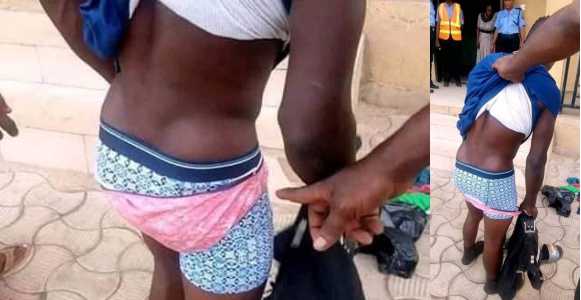 A mob of youths in Lagos on Monday, February 4, apprehended a middle-aged man (name withheld) for allegedly stealing female underwears in the Oshodi area of the state.

The yet-to-be-identified man was nabbed by youths who had noticed his suspicious moves in the area.

According to an eye witness who shared the photos of the incident on one of his social media handles, Chrisguy Festusthe unidentified man stole the underwear of his own sister with the alleged intention of making rituals with it so as to garner enough wealth for himself.

Upon interrogation, the suspected ritualist confessed to have stolen the panties of his own sister with the aim of what he described as “joining the league of boys who drive expensive vehicles in the area.”

The mob of angry youths forced the suspected theft to undress after which the panties of his sister was found within his tights.

The angry youths who wanted to lynch their victim were persuaded to hand over the alleged theft to the police in the area.

This is coming in a few days after Naija News had reported that the operatives of the Economic and Financial Crimes Commission apprehended some internet fraudsters with female panties and other fetish materials suspected to be for ritual purposes.