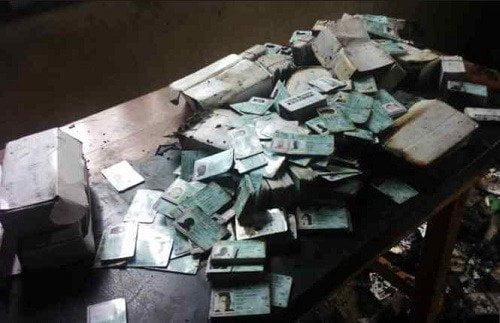 The Independent National Electoral Commission (INEC) said the fate of owners of Permanent Voter Cards (PVC) lost in its Abia office fire would be decided after investigations.

Who afflicted my people with foolishness? They burnt their PVCs, their best weapon against bad government! They have just aided the tyrant's reelection bid because Yakubu's INEC won't replace the the burnt cards before the Presidential election.

INEC National Commissioner and Chairman, Information and Voter Education, Festus Okoye who stated this in an interview yesterday said that commission has directed all its Resident Electoral Commissioner (REC) in Abia to investigate and ascertain the level of damage at its office in Isiala-Ngwa South Local Government Area.

Mr Okoye said that the eligibility of the owners of the burnt PVCs to participate in the forthcoming elections would be determined after the investigation.

“The REC for Abia in conjunction with the security agency has been asked to ascertain the extent of the damage done to that office. He has also been asked to compile the list of PVCs burnt and other equipment that are inside that office.

“It is when we get the comprehensive report in relation to the damage that was done that we will take a decision on what has happened.”On the issue of PVCs collection, you know we have taken a decision that it will end on February 8, which is already here.

“But when we get the report, maybe tomorrow or next, we will take a decision on what to do in relation to PVCs that were burnt.

“On whether we have the capacity to replace the PVCs before the election, it is when we get the report from the REC that we will take a decision on those PVCs that were affected.”

Mr Okoye said that if there was still time, INEC would reprint the affected PVCs after the damage was ascertained, “but whether it is possible for them to collect them within the short period remaining is another thing.

“We have taken a decision that PVCs collection will end on February 8 and after that, we will retrieve all remaining PVCs and deposits them with CBN until the elections are over.“The moment we get the report we will take a decision,” Okoye said.

Why is it that people fail to collect their PVC's? How will someone go through the stress of registering, only for the PVC to be burnt? We the electorates need to wake up.

The Police Public Relations Officer, Abia command, Geoffrey Ogbonna, on Sunday confirmed to NAN the burning down of the INEC office in Isiala-Ngwa South Local Government Area of Abia.

Mr Ogbonna said that the fire occurred on Saturday night, adding that information available to the police showed that the fire started from the toilet and extended to where the PVCs were stored.

The police spokesman said that some of the PVCs were already destroyed before the fire was eventually put out on Sunday morning.

Speaking further, the Head of Public Affairs of the commission in Abia, Bamidele Oyetunji, said that police had taken over the investigation of the incident.

Mr Oyetunji said that the police were in a better position to find the perpetrators of the act and that the commission was not suspecting any politician or its member of staff.