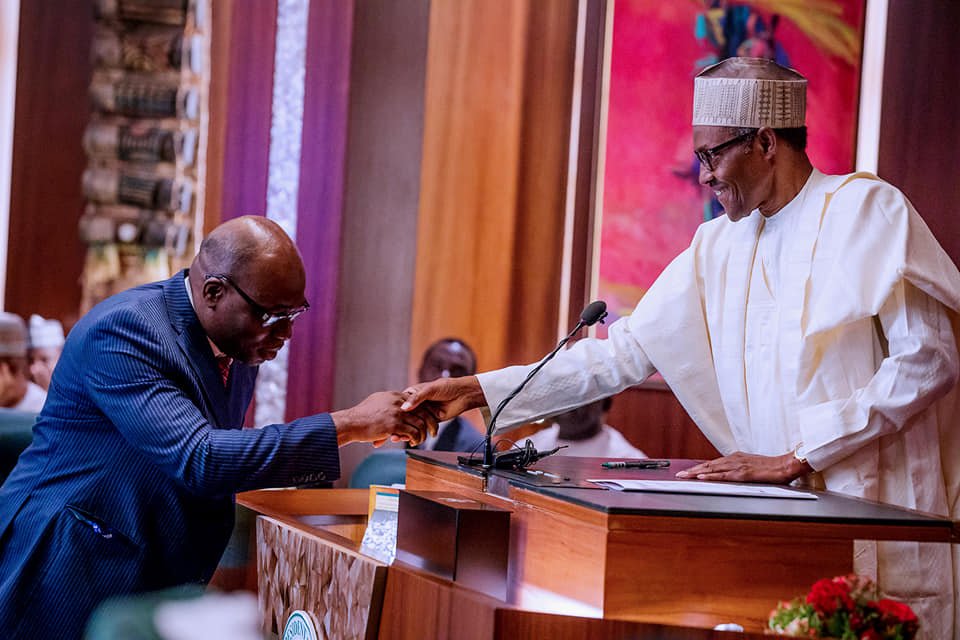 President Muhammadu Buhari has sworn in Professor Bolaji Owasanoye as the Chairman of the Independent Corrupt Practices and Other Related Offences Commission (ICPC).

President Muhammadu Buhari has sworn in Professor Bolaji Owasanoye as the Chairman of the Independent Corrupt Practices and Other Related Offences Commission (ICPC).

Prof Owasanoye is the 4th substantive head of the anti-graft agency since its inception in 1999.#blueprintafric pic.twitter.com/3TWknIJZcQ

Naija News reports that the President also inaugurated eight new members into the commission while the oaths of office were taken.

The members are from Delta, Enugu, Anambra and Lagos.

Others are from Katsina, Jigawa, Niger and Nasarawa including a youth representative who is 27 years old. The swearing-in ceremony was held on Monday at the council chambers of the Presidential Villa in Abuja.

President Buhari charged the ICPC leadership to come up with preventive policies and strategies that will help identify MDA’s prone to corruption. Prof Owasanoye is the 4th substantive head of the anti-graft agency since its inception in 1999. The Senate confirmed the President’s nomination of the chairman and members in October of 2018.

Read the president’s full speech during the ceremony.

Let me congratulate you, Mr. Chairman and Members of the Independent Corrupt Practices Commission Board for being found worthy to serve our country on this most important assignment. Your appointment is a call to service in an important sector and segment critical in our government’s agenda.

Today’s occasion is the continuation of this Administration’s fight against corruption. It is a cardinal programme in the three point agenda that I promised to pursue and will continue to pursue as I seek the mandate of Nigerians for a second term.

The fight against corruption is an existential issue for Nigeria. This is why I have often said – if we do not kill corruption, corruption will kill Nigeria.

We are all witnesses to the damage that unbridled corruption has inflicted on our development aspirations. Apart from deliberate and wanton looting of our national wealth and common patrimony, corruption has eroded our values and ethical foundation as a nation.

The abuse of public office for private gain represents corruption in its worst form. The circumvention of public policies and processes for competitive advantage and profit is another form of corruption.

The abuse of public office for personal benefit even if no bribery occurs is also corruption. The diversion of State revenue or misapplication of budgeted funds falls into the same category.

I am particularly delighted that the ICPC law under which you will operate is robust enough to assist government to sanitize the public sector of corruption in service delivery, public procurement, diversion of public revenue, deliberate misuse of public funds, and so on.

As I have noted in recent times, despite our anti-corruption drive, some agencies of government still divert or refuse to fully account for revenue generated. Rather than obey constitutional provisions and extant rules and regulations, such agencies continue as if nothing has changed.

We are determined to ensure that every agency of government account for public revenue generated or expended. I am looking forward to ICPC’s support both for enforcement of anti-corruption laws and submission of policy measures and directives to prevent revenue leakage and diversion.

In this regard, I urge you to collaborate with other government agencies such as the Office of the Auditor-General of the Federation towards mitigating wrong-doing in public expenditure. Furthermore, I look forward to receiving anti-corruption recommendations linked to e-Government standards and principles.

As the old saying goes – “Prevention is better than cure”. Your statutory mandate recognizes this principle. Therefore, I encourage you to come up with strong preventive policy measures and strategies for government’s endorsement to take us to the NEXT LEVEL in the fight against corruption. I am aware that the ICPC laws empower you to make proposals to assist government in this fight.

Just about a month ago, I opened your Corruption Risk Assessment training for anti-corruption agencies in Africa. That initiative, in support of my role as the AU anti-corruption champion is welcome, and I Iook forward to seeing ICPC distinguish itself as a leading institution in Africa in building capacity to conduct and implement corruption risk assessments.

But charity must begin at home. Therefore, your skills and expertise must be demonstrated in identifying MDAs highly prone to corruption and what must be done to bring about better governance.

I am also aware that you have set up Anti-Corruption Transparency Units (ACTUs) in Ministries, Departments and Agencies. This is an important step towards corruption prevention and ensuring full compliance with government’s anti-corruption measures and our laws.

I encourage you to make effective use of our ACTUs in MDAs by receiving reports directly from such Units and taking enforcement measures to assist government realize its objectives of a cleaner public service.

Once again, I congratulate you on your appointment. My resolve to fight corruption remains unshaken. I assure you of my full support in the fight against corruption in Nigeria.