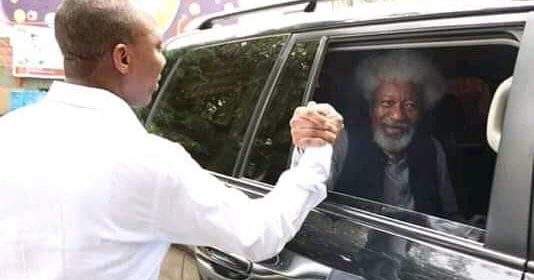 The presidential candidate of the African Action Congress (AAC), Omoyele Sowore, has said the Nobel Laureate, Wole Soyinka, has not endorsed his presidential ambition.

Naija News learnt that Mr Sowore disclosed this via his verified Instagram handle on Sunday.

Our strength comes from our actions and our conquering spirit. Let us set our sights on victory – Feb 16th, #GetYourPVC and vote for #SoworeRufai2019. No need to quarrel or fight; all that matters is to #TakeItBack. ⠀ Sowore is the solution; #AAC is the party.

Prior to this time, Mr. Soyinka had earlier said he is not in support of the candidate of the ruling All Progressive Congress (APC), Muhammadu Buhari and the major opposition People’s Democratic Party (PDP) candidate, Atiku Abubakar, in the coming February 16 presidential election.

He described Mr. Buhari and Mr Abubakar as part of those that have failed in their responsibilities as leaders of the country.

While many Nigerians are waiting for the experienced playwright to declare who he is supporting, Mr. Sowore said Mr. Soyinka refused to support him.

“Prof. Wole Soyinka has expressed to me in private his decision to back a different candidate. “We should therefore not be surprised should he choose to announce this.”

YOU ARE THE BEST MY PRESIDENT… WOLE SOYINKA ENDORSE KINGSLEY MOGHALU BUT THAT'S THEIR PROBLEM… IT'S YOU SOWORE THAT WILL LOVE AND READY TO DIE FOR.

The Sahara Reporters publisher, however, said despite Mr. Soyinka’s refusal to endorse him, he still respects him and urged his supporters to do same.

“While I might disagree with his decision, I have great respect for the Nobel Laureate and urge ‘TakeItBackers’ to accord him the utmost respect at all times.”

Mr. Sowore is among the 73 presidential candidates running for the February 16 presidential election. He has campaigned across Nigeria on a populist policy of free health care for all and zero tolerance to corruption including at the National Assembly.