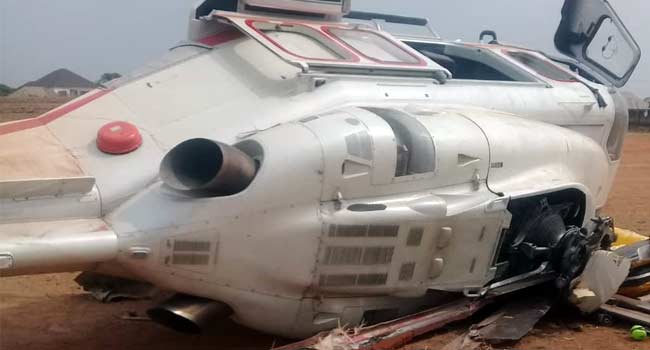 The Nigerian Air Force has debunked the rumours making rounds, suggesting that the Augusta AW139 Helicopter involved in a mishap in Kabba, Kogi, on Saturday, February 2 while conveying Vice President Yemi Osinbajo, belongs to the Nigerian Air Force.

Daramola in his statement from Abuja, Nigeria’s capital, described the promoters of the fake news as unscrupulous and undiscerning individuals.

According to the NAF boss, the propagators of the false information had gone far as circulating a video showing the crash landing of a military helicopter from an unrelated incident.

The statement reads; “The attention of the Nigerian Air Force (NAF) has been drawn to various reports in the media purporting that the Augusta AW139 Helicopter, which was involved in a mishap in Kabba, Kogi State yesterday, 2 February 2019, while conveying the Vice President, Professor Yemi Osinbajo, belonged to the NAF or was from the 011 Presidential Air Fleet (011 PAF).

Some unscrupulous/undiscerning individuals have even gone so far as to circulate a video showing the crash landing of a military helicopter, from an unrelated incident, which neither occurred in Nigeria nor involved NAF or 011 PAF aircraft, portraying it as the one that crashed in Kabba.

The NAF wishes to state categorically that the helicopter that crashed in Kabba does not belong to the NAF or 011 PAF. The owners/operators of the civilian helicopter, Messrs Caverton Helicopters, have already issued a statement on the matter. “

Daramola called on the general public to disregard the erroneous information and the misleading video that had since taken over the internet and suggesting that the crashed helicopter belongs to the Force.

“In addition, the military Dauphin Helicopter, painted in desert camouflage colour, seen in the video circulating on social media does not belong to the NAF and should not be misrepresented as belonging to the NAF. Accordingly, the general public is advised to disregard such erroneous information and the misleading video.”

However, the Nigerian AirForce joined other Nigerians in thanking God for sparing the live of the vice president and other passengers and crew members involved in the mishap.

“The NAF joins the Nation in thanking God for sparing the life of our Vice President as well as other passengers and crew members involved in the mishap. We pray for the safety of the Vice President and that all his take-offs will culminate in an equal number of safe landings,” the statement added.

Biafra: Why I Ran Away From Nigeria Like Mandela – Nnamdi Kanu

CAN Reacts To Osinbajo’s Chopper Crash