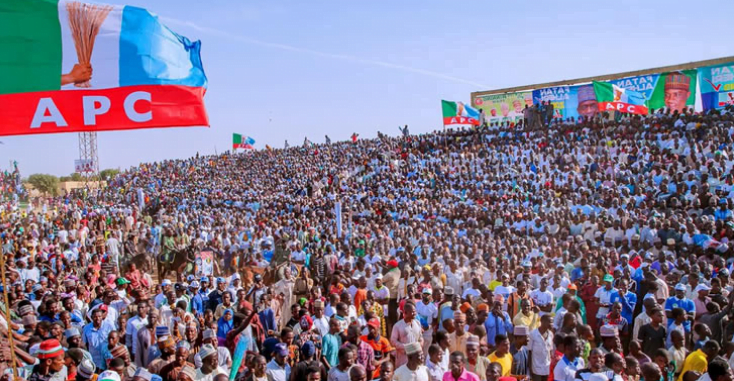 At least one person has been confirmed dead while several others have been left with various degrees of injuries after some suspected political thugs, on Saturday, February 2, trunked the political rally of the All Progressives Congress (APC) in Bayelsa state.

The incident happened at the exact venue of the APC rally in Tungbobiri community in the Sagbama Local Government Area of Bayelsa state where thousands of party loyalists were present.

A source told Naija News that the hoodlums were suspected to have been hired by the opposition to disrupt the political activities of the party.

The one recorded casualty of the incident was said to be an APC member identified simply as Brave Embikoro, while the injured persons were stabbed as they thrived to make their ways out of the disaster scene.

As at the time of filing this report, only the death of Brave Embikoro has been recorded as those injured had since been rushed to the hospital for urgent medical attention.

The rally was organised on behalf of the APC senatorial candidate in Bayelsa West, Captain Karimu, at Tungbobiri community near Toru-Orua, Governor Seriake Dickson’s home town.

While confirming the incident and the death of one, the Secretary of the APC, Alabo Martins, in a brief statement, said; “A party member was killed in Bayelsa West senatorial campaign on Saturday in Tungbo Abiri.”

In their reactions to the attack which they described as ‘heartless,’ some APC members alleged that the attack was melted and sponsored against the APC by the opposition PDP the retaliate the incident that occurred during its rally in the Yenagoa Local Government Area.

This is coming recently after the sacked Bayelsa APC chairman was reinstated by the court.